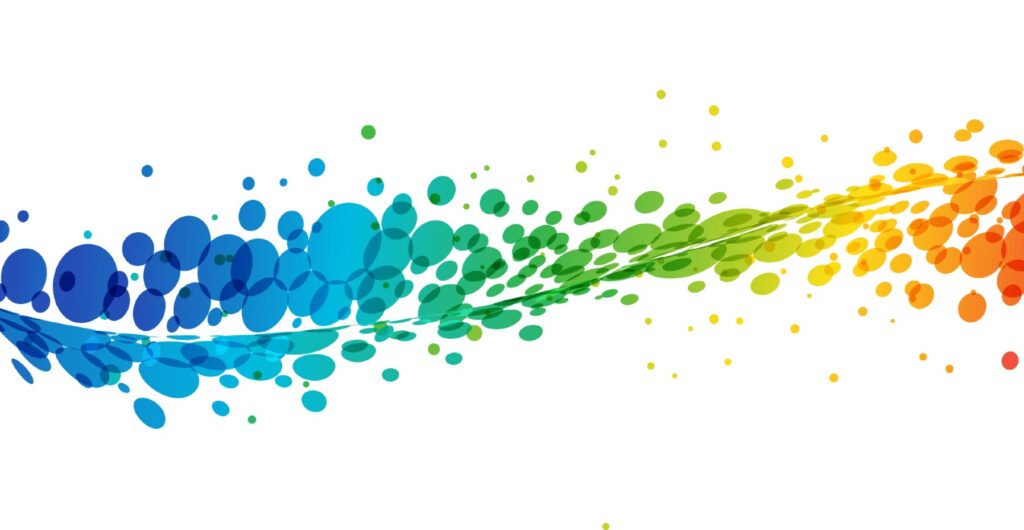 This blog post is adapted from a presentation given at the Elegancy webinar: Hydrogen from Norwegian Natural Gas to Decarbonise Europe & Norway

Hydrogen strategy in Europe and Norway

For example, the EU is in the final stages of delivering a hydrogen strategy as a part of the European Green Deal. The emphasis is on a gradual development of infrastructure and markets, starting with low-hanging fruits such as decarbonizing existing hydrogen production, then increased integration in the overall energy system and eventually seeing large-scale technologies across all end-use sectors.

The recently published Norwegian hydrogen strategy is another example. Even though many wished to see a more concrete or aggressive strategy with hard targets, it still sees both domestic and export market potential with value creation potential along the entire value chain. The strategy also highlights that Norwegian industry—with decades long competence from the energy sector—should be well positioned to compete in a growing market.

Germany has an even more ambitious hydrogen strategy, that highlights the development of whole value chains, further development of a competent, domestic vendor industry and has even set concrete supply and demand targets towards 2030 and beyond. What is especially good to see in these strategies is that hydrogen is regarded as a joint European project and it is acknowledged that imports/exports across borders are a piece of the puzzle.

Other countries such as the UK and Netherlands are also discussing the role of hydrogen in reaching their climate targets and are working towards developing large-scale hydrogen projects on their turfs.

So essentially, there is a quite broad understand in Europe that clean hydrogen will play an important role in reaching Europe´s climate targets.

But then, where can clean hydrogen have a significant impact in the European energy transition, and how big?

How big is the potential for Hydrogen?

A collaboration between SINTEF and IFPEN, the Hydrogen for Europe pre-study estimates the potential emission reductions by use of hydrogen for four different sectors, shown below. 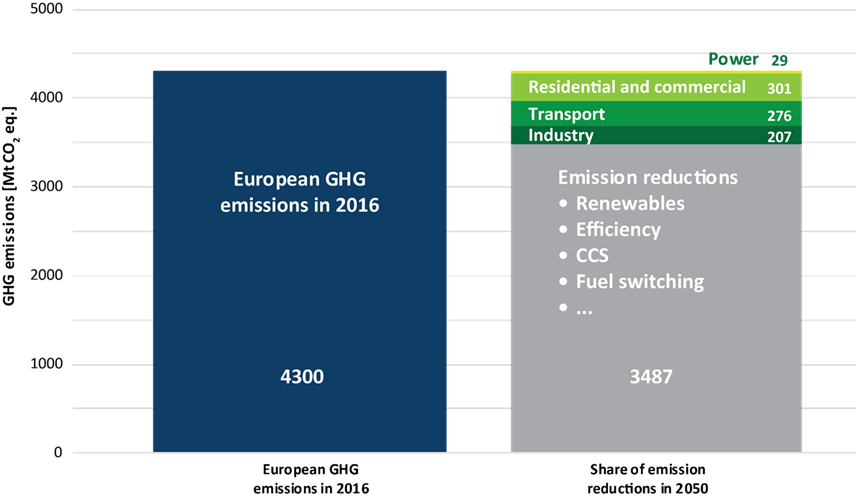 By 2050 the aim is to have reached climate neutrality. The dark blue bar shows 2016 emissions, while the green shades on the right show the estimated potential emission cuts through hydrogen use by 2050, in the power, residential and commercial, transport, and industrial sectors. The rest of the emission reductions (the grey area) will have come through other means, such as energy efficiency, renewable power generation, etc.

The bottom line here is: The potential for reducing Europe’s greenhouse gas emissions by use of clean hydrogen is more than 800 Mt CO2/year in 2050 (19% of current GHG emissions)

Comparing the total volume of clean hydrogen for the Year 2050, based on the Hydrogen for Europe pre-study, to the demand for hydrogen in Europe today, paints a picture showing how much we need to do to get where we want to be. Basically, a 10-fold increase in the market size can be foreseen towards 2050, and all this hydrogen will of course have to be produced with zero or close-to-zero CO2-intensity. 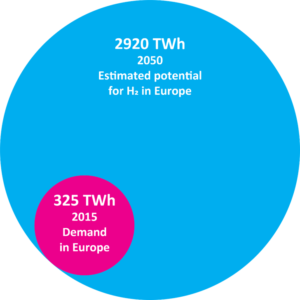 The different methods for producing hydrogen

There are essentially two main methods to produce clean hydrogen with:

Electrolysis of water: Essentially splitting water into hydrogen and oxygen using electricity from renewables or an electricity source with very low CO2 intensity.

Reforming natural gas: Essentially splitting hydrocarbons into hydrogen and CO2, then combining this process with capture and permanent storage of CO2 emissions. Here, the most relevant feedstock from a European, and especially Norwegian perspective, is natural gas but other source fuels can be used.

As for how clean the hydrogen produced from these two methods is, the answer is not so straightforward.

How clean is hydrogen?

Today, the most common method for hydrogen production is natural gas reforming without CO2 capture and storage. By plotting the CO2 intensity in terms of kg CO2/kg H2 on the y-axis (see below), as a function of CO2 intensity of electric power on the x-axis, this method results in a CO2 intensity of the hydrogen in the range of 8-12 kg CO2 per kg H2, depending on a few factors such as the upstream CO2 emissions, that is, how much CO2 is emitted in producing the natural gas itself.

Producing hydrogen from natural gas reforming with a high CO2 capture will result in CO2 intensity of around or even below 1 kg CO2 per kg H2, again, depending also on the upstream CO2 emissions. This example considers average values of upstream emissions for natural gas produced from the Norwegian continental shelf, which are relatively low considering the global average. 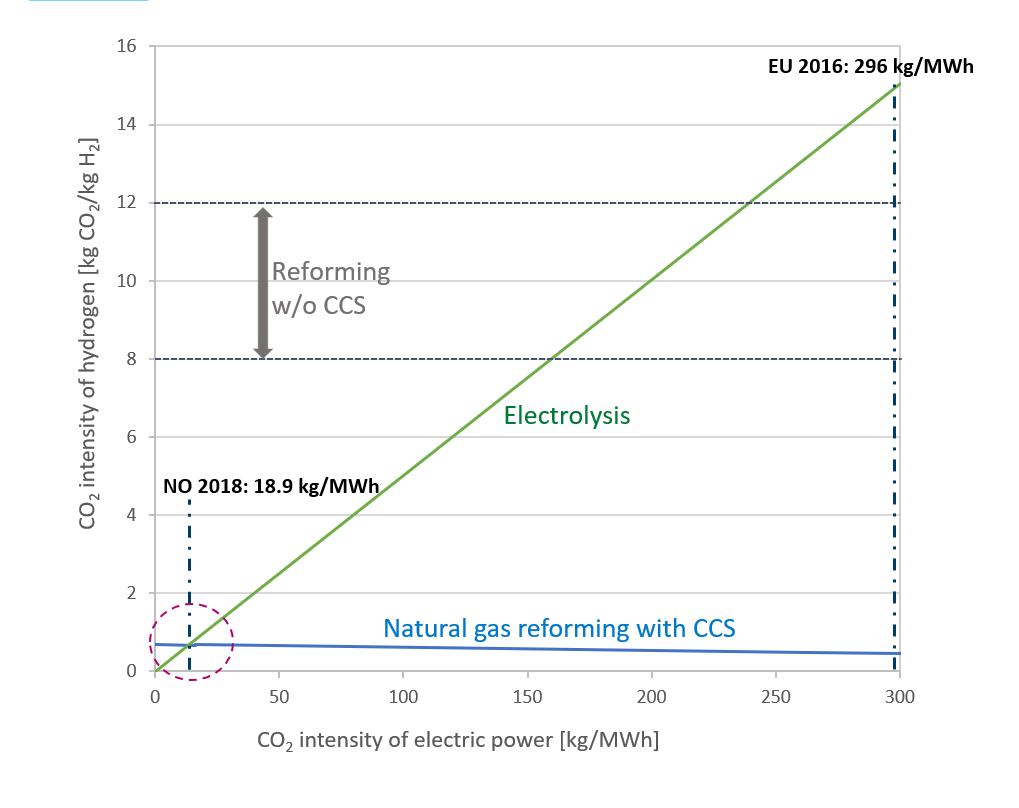 A big opportunity for Norway and Europe

Norway has a big role as a gas exporter to Europe, has a low CO2-intensity of its domestic electricity mix and unharnessed potential for further development of renewable electricity production, such as offshore wind. This means that delivering clean energy in the form of hydrogen using both these production routes is a real opportunity for Norway.

Read more: Taking the Hydrogen & CCS Debate to the Heart of Europe

From the European perspective, building up dedicated renewable capacity for hydrogen production while simultaneously decarbonizing the European electricity system and partly electrifying other sectors, hydrogen from natural gas with CO2 capture can play an important role in supporting growth of a hydrogen market by building volumes and thereby supporting infrastructure development.

To realize the large-scale hydrogen supply for the envisioned growing European market, these hydrogen production routes should be complementary to each other and will benefit from common infrastructure development. Touching on the different European strategies again, especially in the transition period towards a mature, large-scale clean hydrogen market, the two routes will contribute to different scales, different markets and end-users over different periods of time. 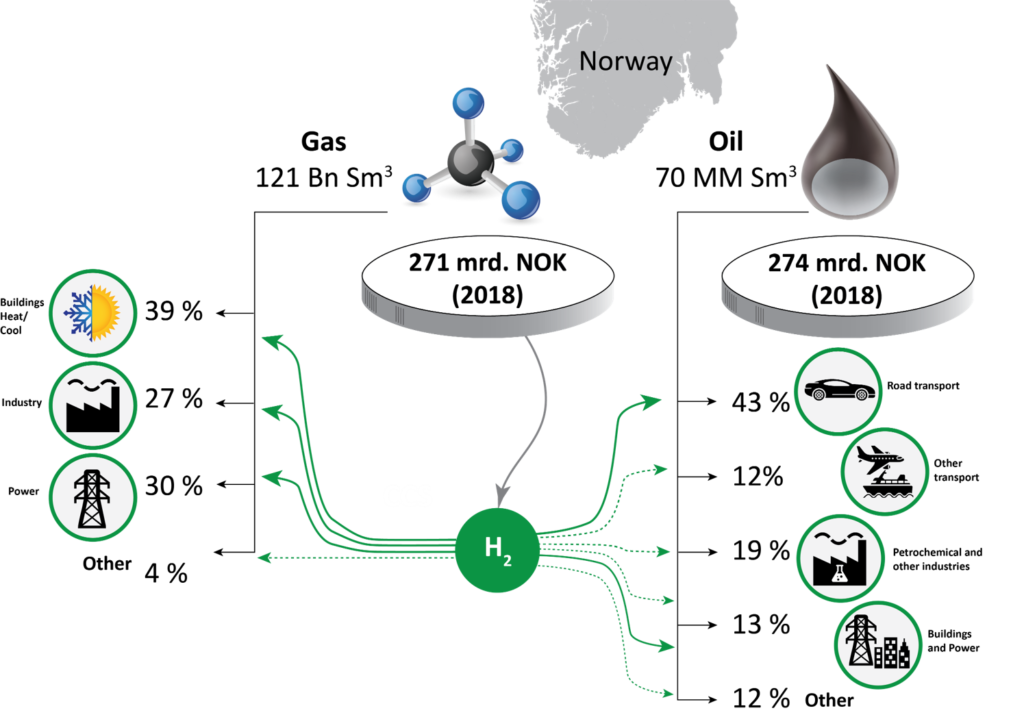 Taking a little closer look at Norway’s potential role in the bigger picture, the country today exports large quantities of oil and gas, in fact supplying about 20-25% of Europe’s demand for gas. These products are used in a number of sectors, such as the residential, industry, transport and power sectors, where hydrogen can play an important role in reducing emissions. Here, Norway has the opportunity to contribute to the export of clean energy, especially in the form of hydrogen from natural gas with CO2 capture, and contribute to significant emission reductions on a European scale.

And just to get some perspective of scale…. 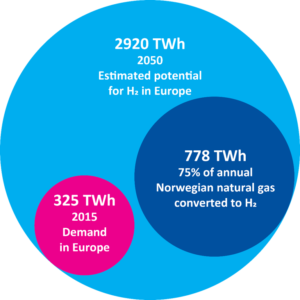 …by doing a small calculation exercise, assuming converting 75% of annual Norwegian natural gas export to clean hydrogen illustrates the significant role that Norway can play in the European energy transition. Again, by taking an active role in supporting infrastructure development, supplying stable volumes while supporting the parallel and future uptake of large-scale production from renewable electricity.

Essentially, my take-away message today is that the future is green, but the path there is multicoloured: 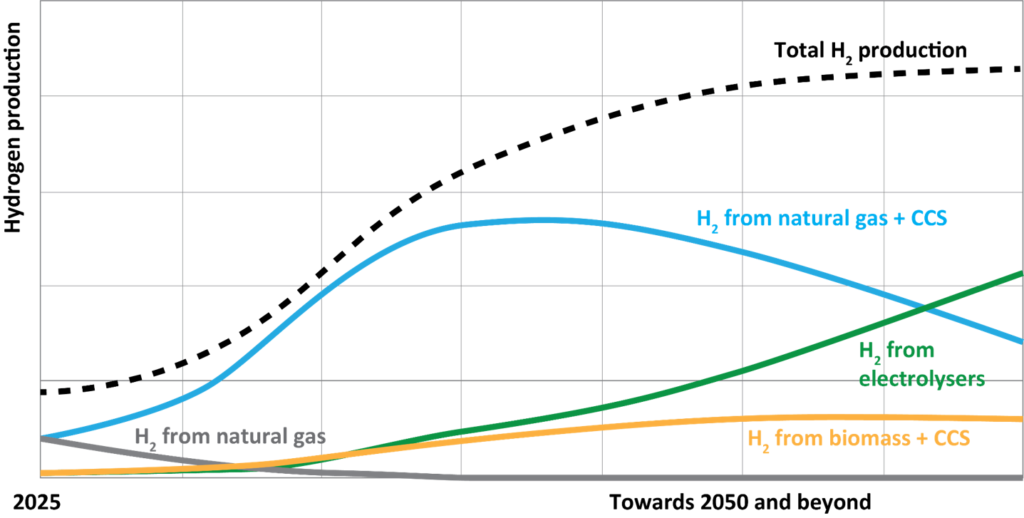 This image is adapted from the results presented in the Hydrogen for Europe pre-study. For details on the underlying assumptions and data used please refer to the full report.

9 comments on “Hydrogen: The Future Is Green, But The Path There Is Multicoloured”