Tired of people claiming that the climate crisis isn’t real? You’re not the only one. Everyone in the SINTEF group is working towards a corporate strategy that is aligned with the UN Sustainability Goals. We are passionate about working on technological and societal solutions to climate change, because we’ve read the research and understand there is no alternative if we are to keep our planet as a hospitable place to live. 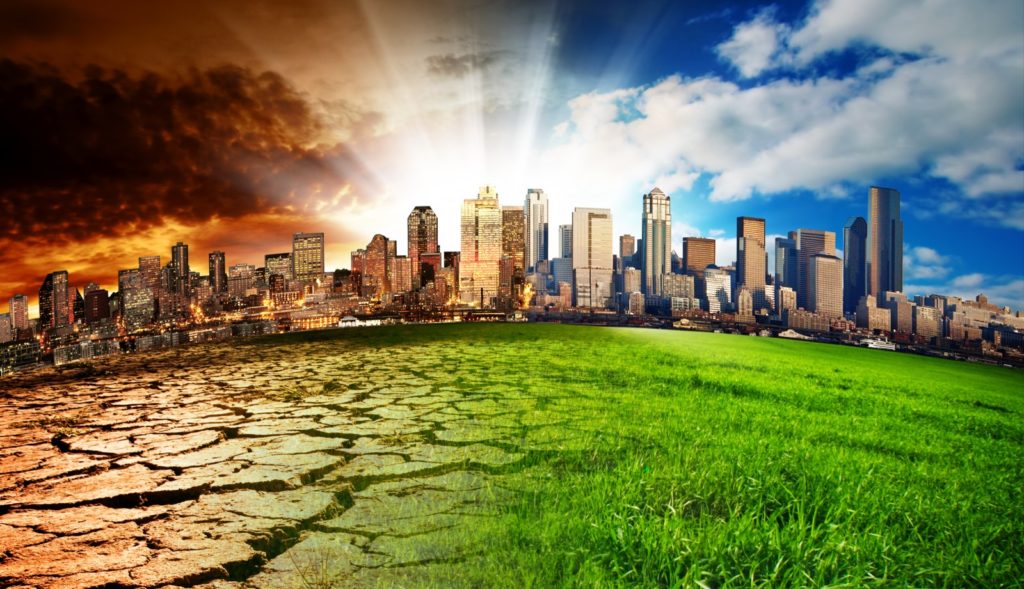 Rapid climate change is happening and the evidence it is caused by human activity is overwhelming. SINTEF does not research the changing climate. We work on finding solutions—mitigation technologies and systems to curb greenhouse gas emissions. We do believe in science and the scientific evidence of a changing climate caused by anthropogenic activities. Here are ten claims made by climate sceptics, with responses based on scientific evidence.

My thanks to Kikki Flesche Kleiven from the University of Bergen for her input to this article.

Claim 1: The global temperature is rising due to increased solar activity.

Claim 2: The climate has changed before, and the fluctuations we’re now experiencing are normal. For example, Svalbard used to have a tropical climate.

The climate has never changed as rapidly as this before. We know this from samples known as “ice cores”. The best example is the long ice cores taken from the Antarctic ice sheet, which acts as an 800,000-year-long archive for past climate and atmospheric gases.

By analysing the contents of air bubbles trapped in the ice, we have gained a highly accurate overview of the temperature variations and CO2 levels in the atmosphere over many thousands of years. The pattern is clear: when the CO2 level increases, the planet’s temperature does too.

It is true that fifty million years ago, the Arctic archipelago Svalbard had a tropical climate. The islands used to be a lot further south, closer to the tropics, due to tectonic shifts and continental drift. However, this also means that the environment has had millions of years to adjust itself. Today, satellite images from multiple sources show that the rate at which the polar ice caps are melting and the lakes are drying up is far too quick for nature to be able to adapt to.

Claim 3: More ice has formed in the Antarctic region. This means that the planet has actually got colder, not warmer.

No, this is wrong, as there is a difference between land ice formed from snowfall and sea ice formed by ocean water freezing. The warmer air temperatures are causing the land ice in Antarctica to melt more than usual. The freshwater melt from the ice ends up in the ocean and makes it less salty. This means that the surface water around Antarctica freezes more easily in the winter and the amount of sea ice increases.

It is also worth noting that warmer ocean water is also eroding the edges of the thick, floating land-based Antarctic ice shelves from below, helping to create conditions that lead to ice-shelf breakup and sea-level rise. This is progressing rapidly along the West Antarctic Ice sheet and along the Antarctic peninsula.

The Antarctic region is twice the size of Australia. According to NASA, which has monitored changes in ice in Antarctica very closely through satellite imagery, the area is gradually shrinking due to melting land ice. You can read more about this here:

Claim 4: There is no evidence that CO2 emissions are causing the planet to get warmer.

Yes, there is. We know that the CO2 levels in the atmosphere are the highest they have been in four million years. We have also known that CO2 is a greenhouse gas and that it is contributing to the rising global temperature since the 1820s, when it was discovered by Joseph Fourier, a French physicist and mathematician.

In addition, we have the ice cores that we mentioned earlier, which have given us accurate figures that demonstrate the historical link between the CO2 level and the global temperature. In other words, we know that periods of warm weather have also had high CO2 levels, and vice versa. Typically, it has been the case that when the temperature increases, the seas produce more CO2, which causes the temperature to rise even more.

The Keeling laboratory at Scripps Institution of Oceanography in the US provides an excellent web tool showing historical and modern measurements of atmospheric CO2.

It’s true that plants need CO2 in order to grow, but the Earth’s plants alone are not able to absorb the large amounts of CO2 that we’re releasing into the atmosphere. In other words, as a result of burning fossil fuels, we have now produced far more CO2 than nature is able to absorb into its own cycle. The excess is so extreme that human emissions need to be reduced by as much as 80 to 90 per cent in order to restore the natural balance.

Read more about how plants will absorb less CO2 as the planet warms.

An increasing number of studies also show that rising CO2 levels threaten food security in another way: by directly decreasing the nutritional value of major crops.

Claim 6: A warmer climate is advantageous.

Advantageous for who? Here in Norway, we will probably have more summer, more rain and milder winters. Recent localized increases in rainfall have produced devastating landslides in rural Norway, showing how just a small change in climate could disrupt our everyday lives. Extreme warming can already be seen on Svalbard in the High Arctic. There, more frequent avalanches have destroyed homes, while more rainfall has led to more ice, preventing wild reindeer from reaching food.

Read more: Rarely Has Half A Degree Meant So Much To Humanity

Other, much more populous parts of the world such as India and Pakistan have seen record high temperatures of up towards 50 degrees Celsius. The rainy seasons have also been delayed in large parts of the African continent, and the resulting droughts have taken the life of both humans and livestock. These consequences match climate researchers’ predictions from 20 years ago.

The fundamental problem is that we have populated the world as if it is constant and unchanging. Therefore, sudden changes in temperature will result in the poorest people who live in unstable and exposed environments, such as river deltas, and flood-prone and barren areas, being impacted first. The temperature changes are likely to be so drastic that unprecedented numbers of people will be forced to relocate.

In addition, oceans and seas are becoming warmer and more acidic. The increase in temperature causes the oceans to expand and take up more space, while the increase in acidity may have dire consequences for marine ecosystems: increased pH influence organisms that use calcium carbonate to build their protective shells – and by extension, the animals that feed on them.

Another effect of these changes is coral bleaching, wherein coral reefs lose the algae that is the source of their vibrant colours as well as food and begin to die as a result. Researchers believe this is already happening in the Great Barrier Reef outside of Australia.

Claim 7: There is no consensus among researchers that climate change is real.

Yes, some researchers do say this. However, 97 per cent of scientific papers produced by the world’s climate researchers agree that we are facing a human-caused rise in global temperatures. There are also differences between researchers who use statistical analysis of the Earth’s temperature, and those who use climate models.

Climate researchers in the UN’s IPPC (Intergovernmental Panel on Climate Change) use climate models. A climate model is based on statistical methods and mathematical comparisons that use scientific laws (such as laws of physics, chemical laws, etc.) to describe natural phenomena on Earth. These models—along with historical and reconstructed records such as ice core data—are more comprehensive than purely statistical analyses.

Claim 8: The temperature increase in the atmosphere has stagnated in recent years.

Correct. The satellite-measured temperature of the atmosphere hasn’t increased significantly since 1998. However, the atmospheric temperature does not impact the climate to the same degree as the Earth’s surface temperatures, which have been slowly and steadily increasing.

In addition to maintaining a fleet of 20 Earth-observing satellite missions, NASA also sends researchers around the globe to investigate different facets of the planet at closer range. Video: NASA.

At the time, 1998 was a record high year in both the CRU and the NASA GISS analyses. According to NASA, it was elevated far above the trend line because 1998 was the year of the strongest El Nino of the century. Choosing that year as a starting point is a classic cherry pick and demonstrates why it is necessary to remove chaotic year-to year-variability (aka: weather) by smoothing out the data. Climate is weather analysed over 30 years.

Read more about measuring the Earth’s surface and atmospheric temperature:

Claim 9: Researchers claiming that climate change is real have been caught lying.

This is a misrepresentation of the truth. While this claim received extensive press coverage in its time, multiple investigating committees have concluded that the IPCC did not deliberately publish misleading data. However, its 2007 report “Fourth Assessment Report (AR4)” did reference two miscalculations.

The most well-known mistake is the so-called “Glaciergate”, which involved the IPCC’s claim that 80 per cent of glaciers in the Himalayas will have melted by 2035. This is entirely incorrect, and the IPCC has subsequently withdrawn this claim and apologised.

However, neither of these mistakes undermine any of the conclusions and recommendations in the IPCC reports.

Claim 10: If we stop ALL CO2 emissions tomorrow, we will avoid climate change.

Unfortunately, this is not the case. Even if we stop all CO2 emissions, measurements show that we will have increased CO2 levels for far too long for the climate to stabilise by itself.

Once CO2 is added to the atmosphere, it stays there for a long time: between 300 to 1,000 years. Thus, as humans change the atmosphere by emitting carbon dioxide, those changes will endure on the timescale of many human lives.

Therefore, we need to find technologies that are able to capture and store CO2, even after we have managed to reduce our emissions to a sustainable level. While these solutions may be expensive, climate change will intensify without them. The resulting increased sea levels, expenses related to widespread relocation, loss of biological diversity, and increase in violent storms will cost society a lot more.

Read more: How we can remove existing CO2 from the atmosphere

SINTEF is constantly working to find technological solutions that will reduce CO2 emissions and limit the impact of climate change. We don’t doubt climate science and our work is targeted towards climate adaptation, climate mitigation and carbon removal technologies. We are confident this is the way forward and see clearly the benefits of a sustainable future and that the planet is worth saving!

My thanks to Kikki Flesche Kleiven from the University of Bergen for her input to this article.

3 comments on “Fact-Checking: Why Climate Sceptics are Wrong”