In line with the 2015 Paris Agreement, the Dutch government has the ambition to reduce national greenhouse gas emissions by 49% by 2030, compared to 1990 levels. This is equivalent to a reduction of 45 megatons of CO2 per annum, of which almost a third must come from industry. The Rotterdam industrial port area has a major role to play in this transition, since several major industrial emitters are concentrated in this area.

Renewable capacity will grow rapidly in the coming years, but demand for electricity is also projected to increase, mainly as a result of electrification of transport and heating. Since renewables are intermittent and grid scale electricity storage is not yet available, other sources of decarbonized energy have to cover demand when weather conditions are unfavorable. Hydrogen can be stored in vast quantities and used to generate power on demand, as well as high temperature heat for industrial applications.

CCS with hydrogen in North-West Euorope

The ELEGANCY project concerns the development of CCS in North-West Europe through the development of a clean hydrogen concept. EU Member States involved in the project include, apart from Norway and The Netherlands also UK, Switzerland and Germany. The specific case study for the Netherlands will research concepts for clean hydrogen production through reforming processes of natural gas and bio-gas with full separation of the CO2. The latter is transported to depleted offshore gas fields in the Dutch North Sea area for permanent storage.

ELEGANCY already provided a detailed inventory of major CO2 emitters in the Netherlands including options for CO2 mitigation. Computer models for hydrogen+CCS chains are  developed on a multi-level approach, including thermodynamics, asset sizing, operational dynamics and downstream hydrogen market economics. Using the models an overall analyses will be done of the options to decarbonize industrial areas. A roadmap will be drafted for the development of H2+CCUS in the Rotterdam region including downstream utilization of the clean hydrogen in local industry and as a replacement of coal, currently used as fuel in two Rotterdam power plants.

In parallel with ELEGANCY, an industrial joint industry project has been initiated and developed by TNO, called “H-Vision”. Within H-Vision the feasibility of a specific H2+CCS case for a particular group of industrial parties in the Rotterdam harbor area is investigated. The project has a short lead time and aims to have its public results ready mid-2019. It is managed by Deltalinqs, representing the relevant industrial parties in the Rotterdam port, while TNO is leading the technology work package. This project brings together an industrial consortium covering the entire H2+CCS chain providing feedback for the overall roadmap to be developed in ELEGANCY.

Using blue hydrogen for the power sector and industry, to replace natural gas, coal, and possibly also residual gases from the petrochemical industry, can rapidly achieve megaton-scale CO2 emissions reduction. A CO2 emissions reduction of 2 megatons per annum is targeted in 2025, which could increase to 6 megatons per annum by 2030, with the possibility of further expansion. Technical, economic and financial feasibility of using blue hydrogen as a decarbonization solution for power generation and industry is explored.

Blue hydrogen is produced from natural gas or industrial residual gasses, using mature technology that can be deployed on the short term. Most of the CO2 will be captured and safely stored in depleted gas fields in the North Sea, but can partly be also used for local greenhouses and potentially as a chemical building block. Blue hydrogen can pave the way towards the “green hydrogen economy” by the infrastructure created that will also enable the transport and storage of green hydrogen. 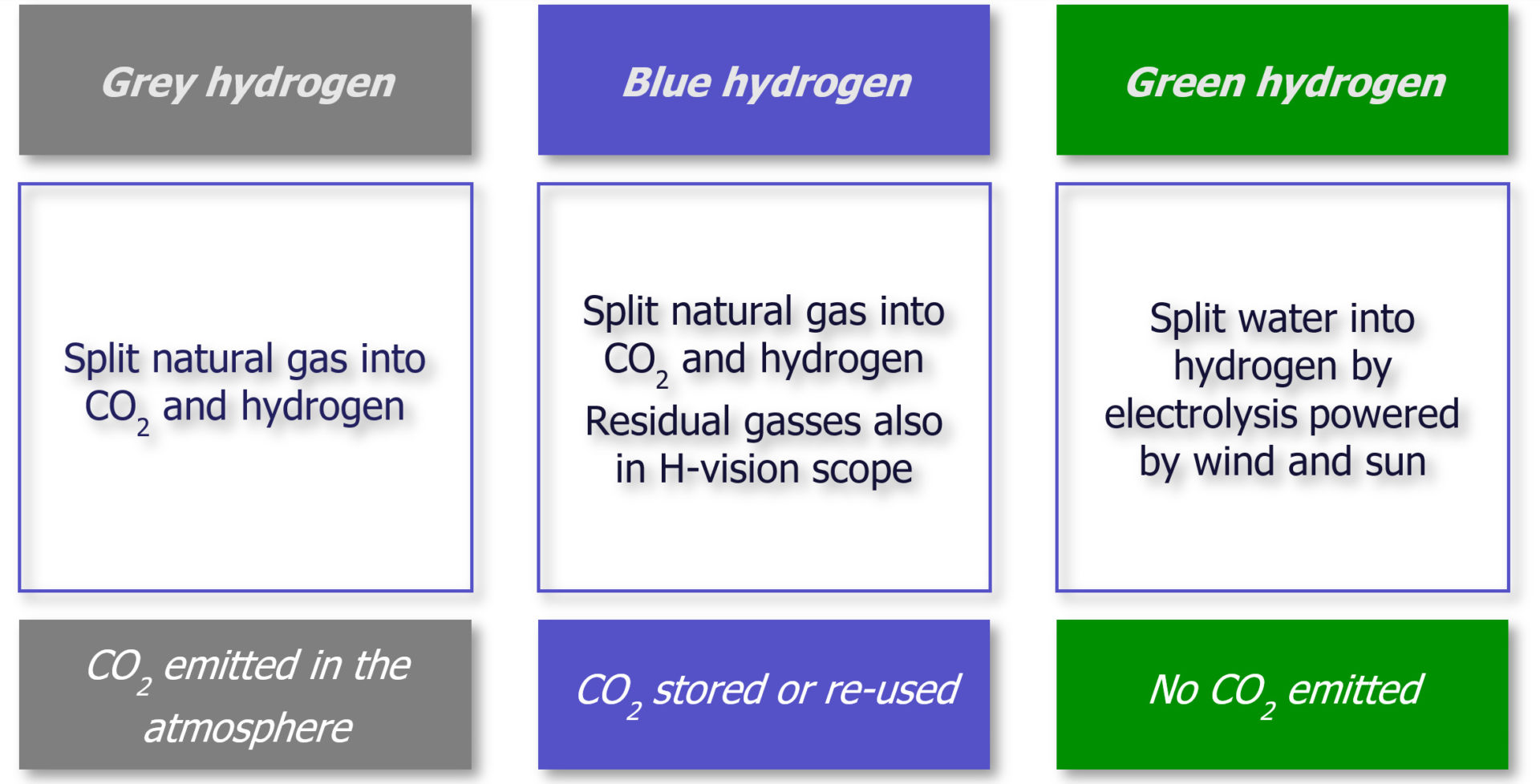 H-Vision incorporates all the elements of a H2-CCS chain for a typical case, and is as such very relevant for the ELEGANCY program which looks longer term and more broad. Supporting information for the project has been reported in ELEGANCY, covering for instance estimates for hydrogen demand in the Rotterdam area, as well as available CO2 storage capacity in the Dutch Continental Shelf of the North Sea. In collaboration with Imperial College London, TNO is working on a spatial model to evaluate how a H2-CCS network is best integrated in the Rotterdam region, with the aim to expand it later towards a broader country-wide H2-CCS network in the Netherlands.