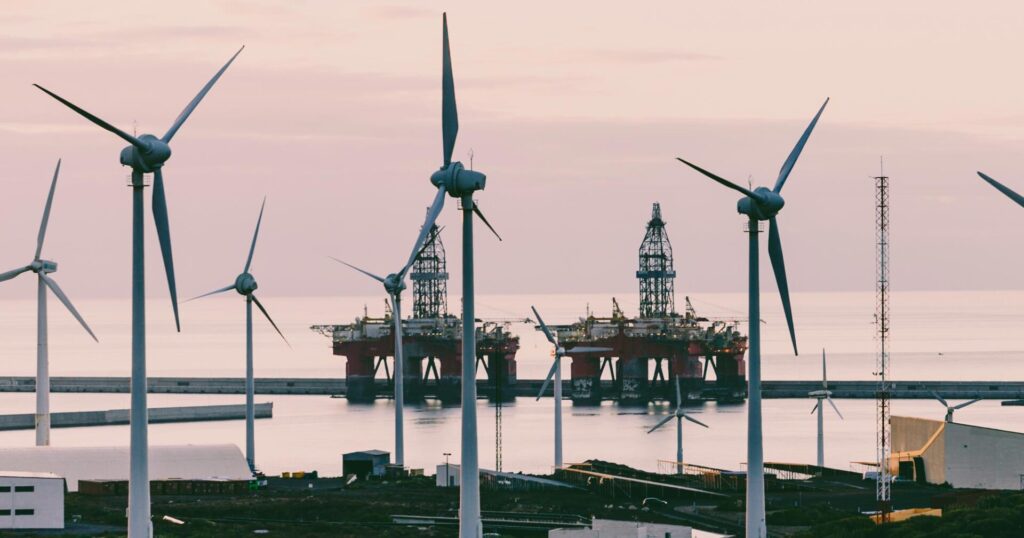 Natural gas represented approximately 50% of the Norwegian production of oil equivalents in 2020. However, not all gas extracted from the Norwegian Continental Shelf is transported to land (see figure 1). Part of it is burnt in low-efficiency, single-cycle gas turbines for the generation of electricity and heat in the oil and gas fields of the Barents, North, and Norwegian Seas. Offshore gas turbines alone account for roughly 20% of the total greenhouse gas emissions of Norway. From a global perspective, it is beneficial to use a renewable offshore source of electrical energy and transport all the gas to the continent. A large land-based combined-cycle natural gas power plant has approximately twice the efficiency of a coal-fueled plant – in other words, the same electrical power for half the CO2.

The oil and gas activities on the Norwegian Continental Shelf are extremely energy intensive. In 2008, a report estimated that 15 TWh of electrical energy was consumed on the active fields on the Barents, North, and Norwegian Seas. To put this figure into perspective, the hydropower plants owned by one of the largest Norwegian power utility companies can produce 17 TWh per year and can supply 2.2 million people, or 40% of the Norwegian population.

Natural gas and petroleum are the remains of accumulated dead organisms at the bottom of ancient seas. Coal deposits were once forests in a time when wood was not yet biodegradable. These abundant energy deposits captured from sunlight millions of years ago allowed humanity to thrive in the present. Nowadays, petroleum, natural gas and coal together represent 80% of the world’s primary energy source. In other words, society would go to a halt if we suddenly stopped using fossil fuels. This dependency on fossil fuels warms the climate. This is why we need to reduce our carbon footprint and move towards a fossil fuel free society. Unfortunately, replacing 80% of the world’s primary energy source will take decades. On our journey towards this goal, we must find and take the less polluting paths.

Opportunities and challenges of offshore wind

Offshore wind farms present an extraordinary opportunity for reducing the consumption of natural gas for electricity generation on the Norwegian Continental Shelf. By connecting a wind farm to the energy-intensive process of an oil and gas platform, a considerable part of the gas that would otherwise get burnt in low-efficiency turbines can be directed to land. However, wind power generation comes with a series of technological challenges.

Offshore platforms don’t store electric energy directly. The energy required by the industrial process and the energy supplied by the generators walk a tight balance. The power demanded by each motor, pump and even light bulb has to be continuously provided by the electric generators. An unbalance of power directly affects the generator’s speed; in other words, the system’s electrical frequency. The governors of the turbines regulate the amount of natural gas burnt for meeting precisely the process demand. They continuously control gas valves (figurative gas pedals) for maintaining the rotating speed of the generators constant. However, wind is intermittent. There is no valve or pedal for increasing or decreasing wind speed. If wind is to replace natural gas, an energy storage system is necessary to maintain the electrical grid of the platform stable.

On the scale of hours or days, average wind speeds vary considerably. Along term energy storage device is therefore necessary to “save” fast winds for the times when they stop blowing. In figure 1, this is represented by the pairing of an electrolyzer and a fuel cell. The electrolyzer breaks water into hydrogen and oxygen using the excess wind energy. The fuel cell combines the stored hydrogen with oxygen, releasing water and electricity, when wind is low.

The turbines of oil and gas platform are usually “aeroderivatives”. In short, they are aviation turbines that run on natural gas instead of jet fuel. This characteristic makes it possible to adapt the turbines for running on hydrogen produced by the electrolyzer. Strategies for sizing the storage system, as well as managing the production and use of hydrogen, are an active field of research. 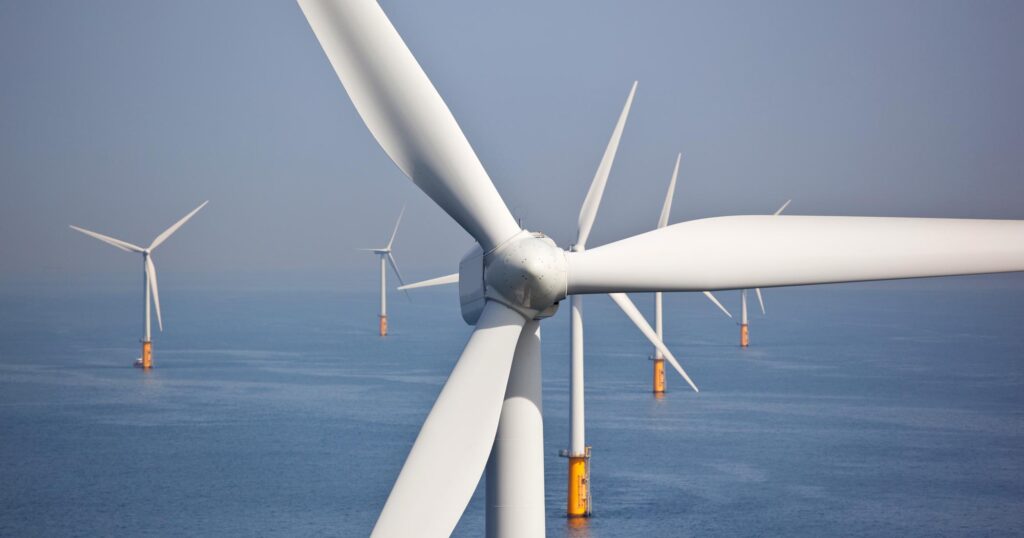 Every spinning thing holds a form of energy called rotating kinetic energy. A large metal part, the rotor, spins quickly inside the electric generator. This rotor is electromagnetically coupled to the platform’s electrical grid. It serves as an energy buffer and is vital for stabilizing the grid during the start-up or shutdown of the platform’s large motors. The energy in the rotating parts of generators is physically available to the electrical grid – no controller or programming required.

Wind turbines, however, cannot spin at a constant speed. Because of that, they need special power electronic converters for operating. This removes their electromagnetic coupling with the grid. Therefore, whenever a gas turbine is replaced by a group of wind turbines, a part of this vital energy buffer that was directly connected to the grid disappears.

This problem can be solved by using a fast storage device. Such a device is represented by the battery in figure 1. A power electronic converter is necessary for maintaining an energy buffer (the battery) and using it whenever necessary. For example, the energy in the battery has to be retrieved for supporting the start-up of a large compressor. Note that this has to be actively programmed in the controller of the energy storage system. This is known as “virtual inertia”. This control strategy is investigated by numerous research groups worldwide and has not yet become a consolidated technology.

Various challenges lie ahead, and many technological advances are necessary on our journey towards a fossil fuel free society. This journey is going to be long and it is imperative that we choose less polluting paths. One such choice is to reduce the consumption of natural gas for electricity generation on the Norwegian Continental Shelf.

In this context, research initiatives like the LowEmission Research Centre are key. This initiative seeks to develop technologies and solutions needed to reduce offshore greenhouse gas emissions on the Norwegian Continental Shelf. A total of 19 PhD students and postdocs, plus 30 MSc candidates are expected to contribute to LowEmission from 2019 to 2026.

Read more on the topic from the same author

1 comment on “Wind energy for offshore installations: opportunities and challenges”