State of the art sensor technology and communication networks allow new ways of condition monitoring, control and maintenance in the power grid. Increasingly better and cheaper sensors are being developed which, in combination with modern information and communications technology, open up a new world of interconnected systems and components. The use of such sensor and communications systems is often called the Internet of Things (IoT), which is expected to play a crucial role in the development of the future’s smart power grid. 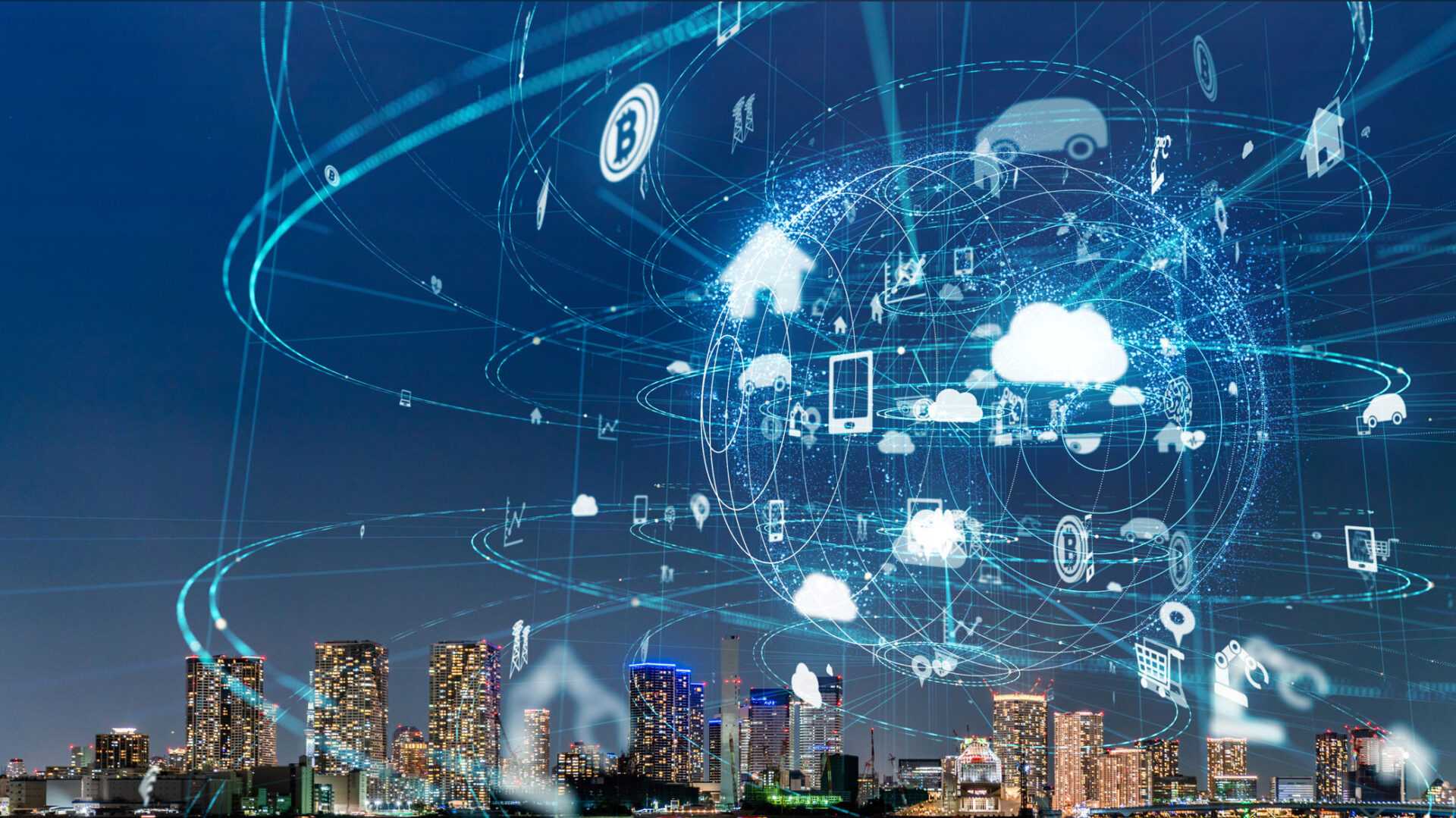 What is the Internet of Things (IoT)?

The Internet of Things has no official definition, but it generally refers to a network of physical devices (“things”) that are interconnected, gather and share data over a communications network (“internet”). In this context, the term “internet” does not necessarily mean the world wide web, but rather any network of interconnected things (or “nodes”).

Advances in sensor technology and the development of wireless solutions may open the door to more advanced monitoring of critical infrastructure in the power grid. It can enable us to identify partial discharges in power components, temperature, humidity and environmental changes in substations, as well as vibrational analysis in switches, and many other exciting applications.

Already there are examples of sensor solutions in use. For example, monitoring of ground faults and protection, oil and gas levels in transformers and temperature in windings, terminations and joins. Based on data from these sensors, IoT solutions can combine advanced physical models and data-driven analysis, and provide valuable information about the condition, ageing, faults and degradation of the power grid’s critical components.

This allows us to predict when components in the grid will fail. It may provide cost savings for maintenance and replacements because a fault can be repaired before it becomes serious. This is what we call condition-based maintenance, as opposed to scheduled maintenance which is common today. This can open up for more efficient asset management and maintenance of the facilities, which will save costs for the grid companies in the long run.

At the same time, there are numerous challenges related to the introduction of IoT sensors in the power system. New vulnerabilities to cyber threats, ownership of and storage of sensitive data, off-the-shelf vs. tailor-made solutions, centralized vs. edge computing, and costs measured against gains from implementing an IoT-based monitoring system, to name a few.

At SINTEF we work closely with these issues to improve the security of supply and contribute to the development of a more accurate maintenance scheme in the power grid. We investigate which IoT technologies are best suited for the detection of typical faults in power components, we test sensor systems exposed to strong electromagnetic stresses, and we compare different communication protocols against each other.

Traditional short-range radio protocols (such as Zigbee and Bluetooth) are not adapted for long distance data transmission, while solutions based on cellular networks (such as 3G and 4G / LTE), which are well suited for long range communication, consume a lot of energy and have higher costs. Therefore, specific communication protocols for IoT applications have been developed. One promising technology with increasing popularity is Low Power Wide Area Networks (LPWAN).

LPWAN is the designation of a group of communication protocols that are characterized by low energy consumption, long range and low costs. In other words, they are highly suitable for large-scale IoT applications with a large number of interconnected devices that need to send small amounts of data (100 to 60k bps) over long distances (5 to 40 km), at low costs (2 to 20 EUR/sensor). There are several types of LPWAN technologies, with Sigfox, LoRaWAN and NB-IoT being the most widespread. 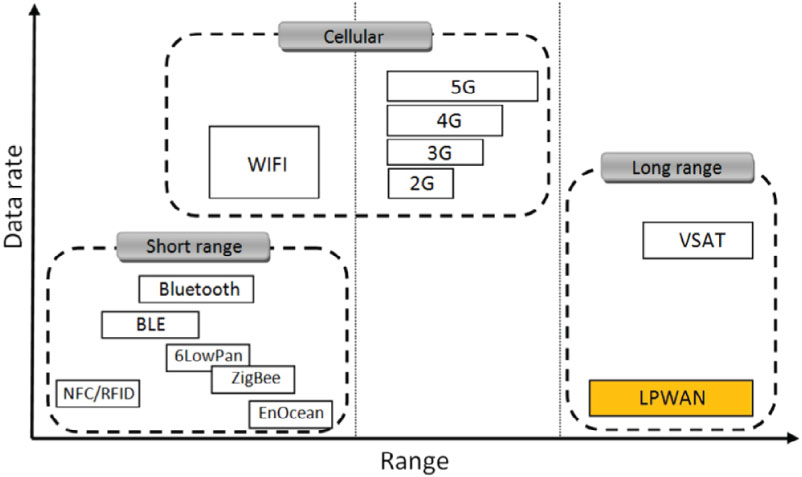 SINTEF Energy Research investigates IoT technologies for the power grid. In this work, we test and compare solutions based on LoRaWAN and NB-IoT. This is because LoRaWAN is an open standard protocol and NB-IoT is offered by the largest mobile operators in Norway, while Sigfox is a proprietary protocol. LoRaWAN and NB-IoT have many similarities, but there are certain differences between them, especially when it comes to battery life and costs.

LoRaWAN (Long Rage Wide Area Network) is based on the LoRa technology, which is controlled by the LoRa Alliance, an association of more than 500 companies. LoRaWAN is an open standard protocol that uses the unlicenced 868 MHz frequency band in Europe, which means that anyone can buy LoRaWAN gateways and set up their own network. It is nevertheless worth noting that LoRa, which constitutes the physical layer of the protocol, is based on a patented modulation technique developed by the company Semtech. In other words, you need to buy a LoRa-chipset from Semtech, even though you are free to set up your own LoRaWAN network. The most commonly used server service to set up a LoRaWAN network is the open platform The Things Network.

NB-IoT (Narrowband-IoT), launched by the 3GPP (an association of standardization organizations for telecommunications), is a licensed protocol. It is built on the LTE protocol (long-term evolution) and used licensed LTE frequency bands (700, 800, 900 MHz). NB-IoT can be viewed as a simplified version of LTE, designed for IoT applications, built on the well-established LTE infrastructure, and offered mainly by telecom operators.

Compared to LoRaWAN, NB-IoT has slightly higher costs, higher energy consumption, against a slightly larger data rate and payload size. The fact that NB-IoT is built on the LTE technology gives it an advantage as there is already available network infrastructure where there is mobile coverage, given that the mobile operator in the area supports NB-IoT. However, the requirement for a sim card and a subscription from the telecom operator leads to higher costs.

Here is is a comparison between LoRaWAN and NB-IoT: 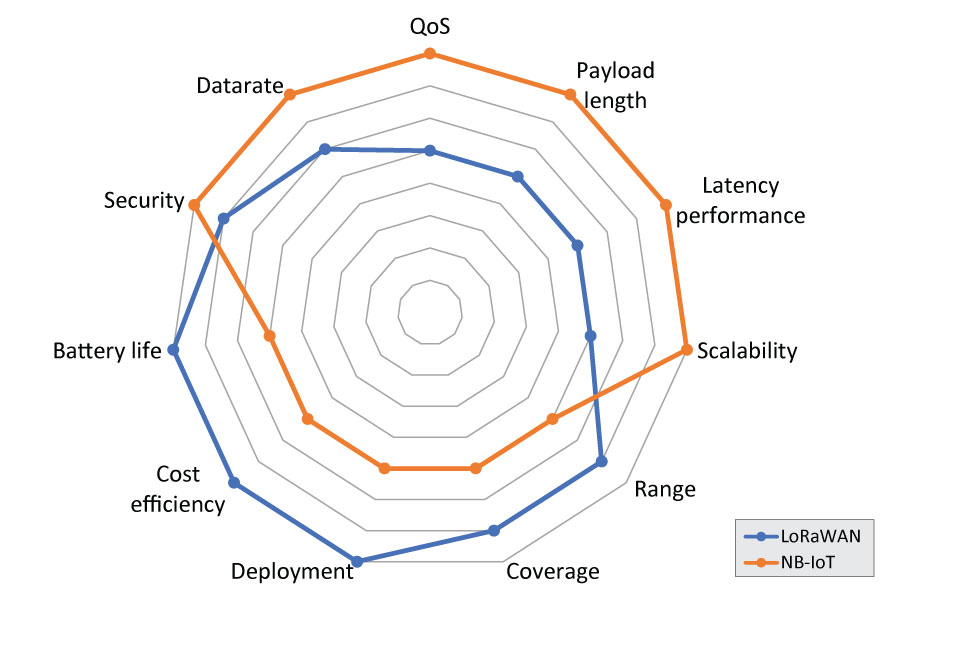 Both LoRaWAN and NB-IoT are interesting technologies for IoT-based monitoring in the power grid. LoRaWAN is more cost-effective and battery-saving, and with its open solution gives users full ownership of the data and network infrastructure. LoRaWAN also provides the opportunity to set up networks in areas where there is no mobile coverage, in contrast to NB-IoT, which is dependent on the local mobile network. NB-IoT offers greater capacity for data transfer, at a higher cost and higher energy consumption. In the sensor has a constant power supply (not battery), and if higher data transmission capacity is needed, NB-IoT may be a better choice.

Cyber security and IoT in the power grid

Although IoT opens up to new possibilities for monitoring of components in the future’s smart power grid, the vulnerability to cyber attacks may increase. As more and more sensors and devices that are connected to the Internet are installed in critical infrastructure, the number of potential points of attack will increase.

An attack can have serious consequences on the power grid. The physical infrastructure (power components) can be destroyed or put out of play, the control of the system can be lost, or sensitive information can end up in the wrong hands. In a worst-case scenario, such attacks can pose a threat to the security of supply in the energy system, ultimately having catastrophic effects on society.

A cyber attack can take different forms. We often distinguish between device attacks (where a compromised sensor can be used to spread a virus disguised as measurement data), data attacks (where data is inserted, modified or removed from the communication stream, tricking the system into making the wrong decisions) and network attacks (typically denial-of-service attacks where the network is flooded with traffic, making the services inaccessible or delayed).

An attack can also come as a combination of these types, in addition to new threats and attack strategies being constantly developed. This is an important challenge with IoT solutions in the power grid, and it is necessary to implement robust cyber defence systems to minimize the risk of harmful attacks.

The increase in the number of connected devices leads to larger and larger amounts of collected data, which in turn increase the need for extensive data processing and storage. Transmitting, storing and analysing the enormous amounts of data generated by IoT-based sensor systems places great demands on data analysis. However, large amounts of data also open up new possibilities for monitoring the power grid by using advanced statistical methods for big data handling, machine learning algorithms to find previously undiscovered relationships, as well as monitoring and predicting the condition of components using artificial intelligence (AI).

All in all, modern sensor and communication technology provides new ways of operating, maintaining and monitoring components in the power grid. At the same time, there are challenges related to cyber security, handling of big data and costs vs. gains of implementing IoT solutions. At SINTEF we work closely with these issues to contribute to the development of smart power components in the grid of the future.

0 comments on “IoT based monitoring for power grid components”