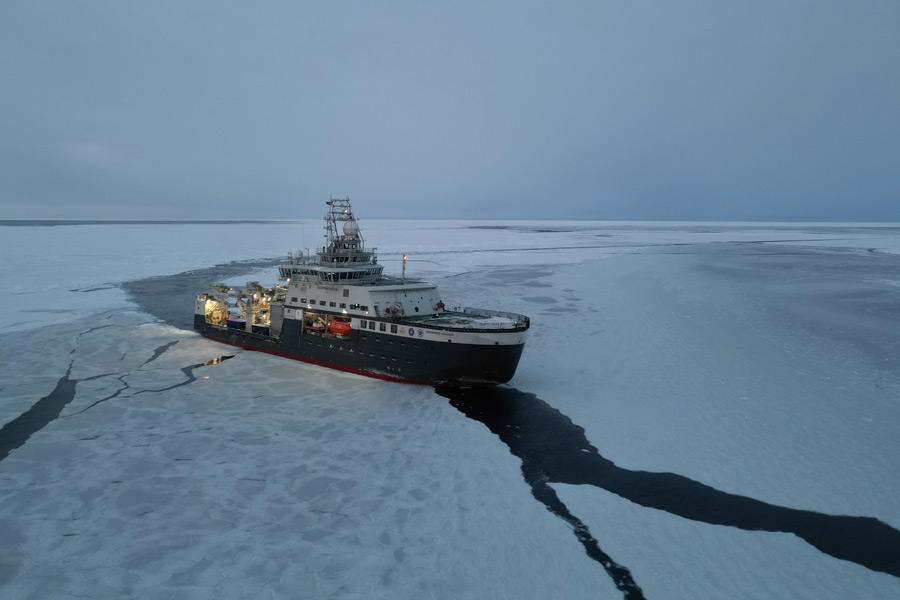 Norway is a bit more acquainted with its own backyard as a result of the first leg of the very first GoNorth polar expedition. Seismic surveys were carried out in areas we knew very little about until now. Data was acquired in a range of topics, from life in the Arctic Ocean to pollution from afar, via the sea ice of the past – and of the present. The data will be analysed by scientists for many years to come.

– We now have better data than ever to ascertain where the limit of the European continental crust in the Arctic is located, says Alexander Minakov (UiO), who was one of the expedition’s co-chiefs. He adds that more answers will emerge as the data gets analysed. 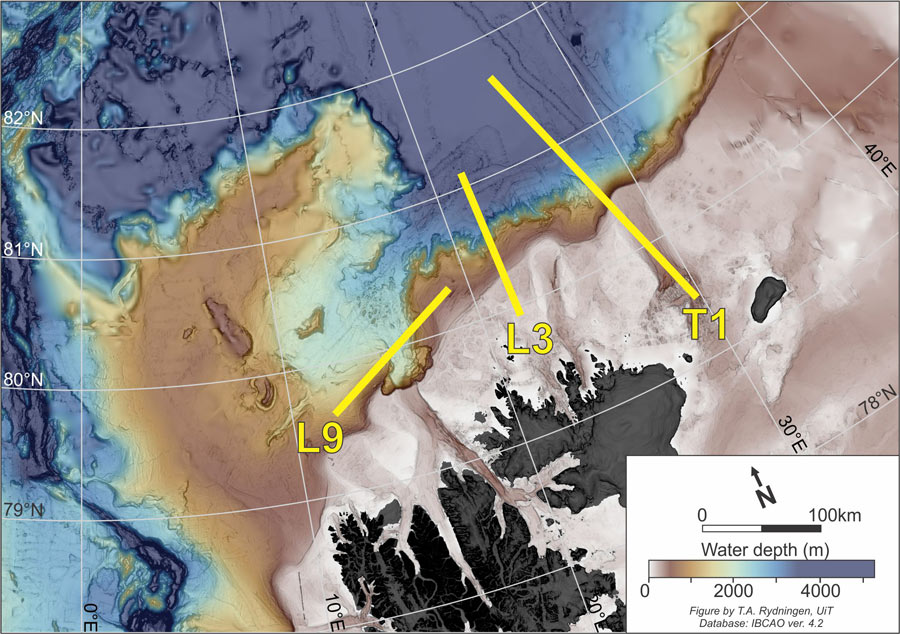 RV Kronprins Haakon carried out seismic profiles along these three lines. The T1 line was the subject of a seismic refraction survey; a time-consuming process. First, ocean bottom seismometers are placed on the sea floor, along the whole line. Then, the ship sails along the line while an airgun sends sound and pressure waves to the sea floor.

The seismic waves travel far below the seafloor, and the echo that comes back gets recorded by the seismometers. After that, the ship sails along the line one more time to pick up the seismometers; this needs to be done because they have no transmission capabilities.

Such an operation is especially difficult to carry out in the Nansen basin, where ice on the surface can damage the airguns, and water depths of over 4000 metres increase the odds of losing seismometers. A remotely operated submersible vehicle, UiB’s Ægir 6000, was used to place and pick up several seismometers. The operation takes a long time, but the results are worth the effort. Seismic refraction profiles reveal information about the whole crust, all the way down to the mantle.

The L3 and L9 lines on the map were investigated with seismic reflection profiles. This process is comparatively simpler: both the airguns and the receivers are fixed to a cable, towed behind the ship. The data acquired in such a way only sheds light on the upper layers of the seafloor but has a better resolution than that of seismic refraction.

Seismic surveys require a lot of work. Scientists and engineers from University of Oslo, University of Bergen, UiT The Arctic University of Norway and Denmark’s GEUS contributed with their work during the expedition. The same institutions, plus NORSAR, will analyse the data after the expedition. The data will also provide the foundation to educate the next generation of polar researchers in the field. Two PhD candidates from UiT and one from UiO participated in the trip and will be involved in the data analysis.

Akvaplan-niva sent a scientist and an engineer to gather data about life in ocean floor sediments, in the water column above and in the ice. In addition to gathering sediment, water and ice samples, they collected data using high-tech solutions.

A lander equipped with oceanographic and biological sensors was lowered to the seafloor at the beginning of the expedition and gathered data for two whole weeks. An ocean glider travelled along the T1 line. This is a torpedo-shaped, autonomous submersible drone, also equipped with an array of sensors.

Traces of pharmaceuticals in the Arctic

Frode Leirvik and Thor-Arne Pettersen, from SINTEF, were also on board to work on a project looking for pollution in the Arctic Ocean; traces of pharmaceutical and personal care products. The pair collected water samples from 14 locations and depths – 600 litres each time. They filtered the water and ran it through a device designed to accumulate any traces of pharmaceuticals. In addition, they gathered plankton and sediments to be analysed for the same compounds.

Clues from the past

Two scientists from NORCE were on board, working to use ancient DNA to paint a picture of historical sea ice conditions. The first step in this project is to establish a database of sediment DNA from many areas with different sea ice conditions. During the expedition, Jon Hestetun and Stijn De Schepper gathered samples from 10 different areas.

Three PhD students and one postdoc from NTNU participated in the expedition to work on their projects. Vegard Hornnes and Evgenii Salganik went on the ice twice to measure its thickness, density, salinity, and mechanical strength. These measurements will be used as a basis for simulations that will help calculate the likelihood of icebergs and sea ice in the southwestern Barents Sea.

Also onboard was PhD student Nabil Panchi, who works on automated systems that can interpret pictures of sea ice taken by passing ships. He gathered thousands of pictures during the trip. Paul Rübsamen-von Döhren, also a PhD student, was not so lucky. He participated in the expedition to study a phenomenon called marine icing – when sea spray freezes on ships or structures. Unfortunately, the weather conditions during the trip were such that there was no marine icing to observe during the trip.

Expedition chief Jan Sverre Laberg (UiT) spent months planning this trip. He was up at all hours of the day during the expedition. Ship time is expensive and to avoid idle time, more activities have to be planned than can be carried out. This ensures activities can continue in case something has to be cancelled due to bad weather or equipment breakdowns.

The result is that not all on board get to do everything they planned. But all participating institutions got some data out of the trip. In addition, everyone got the experience of working on such a multidisciplinary expedition; experience that will be useful when planning the next GoNorth expeditions.

– All participants worked incredibly hard for their own and their colleagues’ projects. Add to that a dedicated crew and all the pieces were in place for us to feel really satisfied with the results of this first leg of the first GoNorth expedition, says expedition chief Jan Sverre Laberg.

The second leg of the expedition

The first part of the expedition, which explored the area North of Svalbard and the Nansen basin, is completed. The second part will look at the Knipovitch ridge, West of Svalbard. The Ægir 6000 ROV will perform more dives to find out what minerals are present in the area.

Watch the video summary of the expedition

Email Profile page
Emissions cuts on the shelf: rapid action needed GoNorth: Returning from the Arctic with a trove of data

1 comment on “GoNorth: Returning from the Arctic with a trove of data”