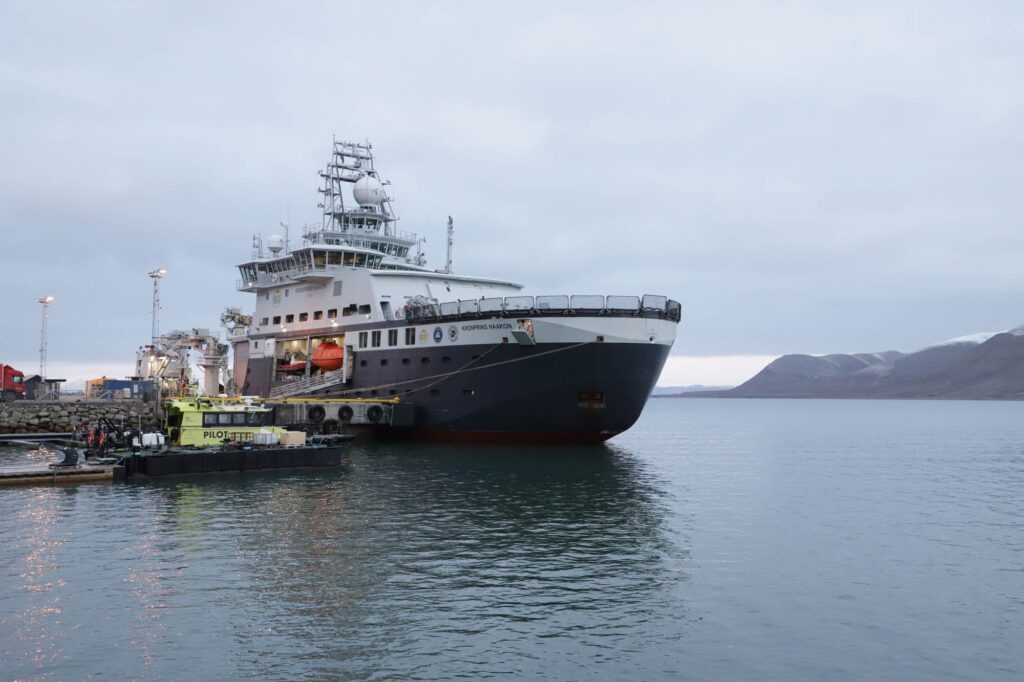 After years of planning, the first expedition of the Norwegian Arctic Ocean research programme GoNorth is finally underway. On board are 35 scientists, technicians and students that will work to increase our knowledge of Norway’s northernmost waters.

Ice and challenging conditions have made it difficult to gather data north of Svalbard, and as a result, we know relatively little about the area. Increasing our knowledge of these waters became even more important in 2009, when the UN’s Commission on the Limits of the Continental Shelf granted Norways territorial claims on its northernmost shelf.

With the increase of Norway’s territorial waters comes an increase in the country’s management responsibilities in the area. By being present to gather data and build knowledge, Norway exercises its sovereignty in the area. The Norwegian government has defined the High North as its most important strategic area of foreign politics.

The lion’s share of the research activity on board will consist of geophysical and geological surveys. These will be carried out by researchers from UiO, UiT and GEUS.

We know that once, about 55 million years ago, the Arctic Ocean was a gigantic freshwater lake, with surface temperatures of up to 25°C. We know that eventually, continental drift opened a passage between Greenland and Svalbard which connected the Arctic Ocean to the Atlantic Ocean, and that after that, things got a lot colder. What we don’t know is exactly how and when this happened, or how this connection between the two oceans impacted the climate.

To answer all these questions, we need to apply a wide range of data and methods. The GoNorth expedition will gather both seismic data (see box) and complementary magnetic, gravity and geothermal heat flow data. All these datapoints will help testing various proposed models for the continental breakup that created the link between the Arctic and Atlantic Oceans. Sediment samples from the sea floor will also be collected and analysed to determine their composition and age, which should shed light on the history of the area’s geology and climate.

Seismic data acquisition consists of using sound waves to explore subsurface geology. An array of airguns fires compressed air. The sound waves travel deep beneath the seabed, and those that bounce back are detected by audio receivers. In seismic reflection data, the receivers are located within a cable/streamer towed behind the ship. In seismic refraction data, the receivers are placed at the seabed. The data recorded provides information about the geological structures and sedimentary layers present under the seafloor.

Another activity on board the Kronprins Haakon is to gather data that will, in the long run, help us better understand historical ice conditions in the area.

Knowing how much ice there was in the Arctic under historical climate conditions can help us better understand what will happen in the future. Since observing past ice conditions directly is impossible, we need to use proxies: evidence that lies at the bottom of the sea. Scientists from NORCE will use ancient DNA stored in sediments as such a proxy. This has never been done before.

In concrete terms, this means that the scientists are creating a DNA database of samples gathered from various areas in the Arctic. During this expedition, they will gather samples from areas located to the North and to the West of Svalbard.

NORCE scientists will also gather samples to try to learn more about rapid climate change episodes that have happened in the past. The idea is to try and see how these past changes can help us understand the consequences of future rapid climate change.

NTNU will do a quite a bit of research about ice during the expedition. One team will measure sea ice thickness, salinity, density and mechanical strength at various locations. The idea is to then use these measurements as the basis for simulations aiming at establishing ice statistics for the southwestern Barents Sea. The idea is to shed light on the likeliness of icebergs and sea ice in the area. Such information is relevant for anyone wanting to build offshore structures at those locations.

A PhD candidate is working on an automated system that can interpret images of sea ice recorded by passing ships. The final aim is for the system to provide ice reports in real-time. During the expedition, geo-referenced sea ice information will be collected, combined with data from other sensors onboard the ship.

In addition, a phenomenon called Marine Icing will be investigated. Marine icing happens when sea spray sticks to ships or structures and freezes in place, making the ship or structure effectively heavier. During the trip, the adhesion of spray ice samples growing on aluminium sample holders of various sizes will be measured. The samples will then be collected. Other details will also be recorded, such as the conditions at the time of the icing (wave height, air and water temperature and wind speed and direction). The overall aim is to establish in what conditions marine icing occurs.

SINTEF engineers will gather samples and data about the presence in Arctic waters of pollution from pharmaceutical and personal care products. The main sources of this type of pollution are the dumping of sewage by coastal settlements and sea-based industries such as cruise lines.

The engineers will gather sediments and water samples, and analyse zooplankton and amphipods (small crustaceans that look like tiny shrimp) for traces of pollution. The results will be used to create models of the ocean that could reveal where the pollution originates. In the long run, the analyses will make it possible to evaluate the risks posed by this pollution for various areas, and suggest changes in regulation to prevent further pollution.

A team from Akvaplan-niva is taking part in the expedition to learn more about the species present in the area. A glider will be deployed (gliders are autonomous, torpedo-shaped underwater drones) and gather information about the water and the species it contains. A series of sediment samples will also be gathered to find out more about the biology of the area.

Scientists and technicians from 10 institutions are participating in the expedition, often with a focus on completely different areas of research. It is a logistical puzzle to ensure that everyone gets what they need, that all the necessary material is in on board, and that everyone gets the safety training they need to ensure their own – and others’ – safety.

Jan Sverre Laberg, professor at UiT, is the expedition leader: “The big job so far has been to set up a programme that makes it possible for all participants to get something out of this expedition. From here on, the priority will be ensuring that the various groups work well together, and that we succeed in gathering the data we want.”

* = Represented on board the ship on this expedition

Email Profile page
Emissions cuts on the shelf: rapid action needed GoNorth: Returning from the Arctic with a trove of data

1 comment on “GoNorth launches expedition in the Arctic Ocean”