Light is one of the most important energy sources for life on Earth. It is used by plants in photosynthesis to make energy and grow, eventually becoming food for others and forming the foundation of the food web. Life in the ocean works in the same way, where microscopic algae – phytoplankton – float around near the sea surface, photosynthesising, producing around 50% of global oxygen, and providing the primary food source for the ocean ecosystem. So, phytoplankton are important, and phytoplankton need light.

In the ocean, light comes mostly from the sun. Between the sun and the microscopic phytoplankton that need it, there are many opportunities for light to get redirected or absorbed. You can think of light as particles, or ‘photons’, flying around in straight lines until they hit something. Between the top of the atmosphere and the top of the ocean the atmosphere itself absorbs a small amount of light, and water droplets in clouds scatter and reflect light very efficiently. If light manages to get to the ocean surface, it might reflect off the surface back into the sky, or it might penetrate and start propagating through the water. Once light enters under the waves it is in a similar situation to when it was at the top of the atmosphere – but this time it can be absorbed by the water itself, or it can be scattered by small, suspended objects (particles or organisms). The main difference between the atmosphere and the ocean is that the chance of a photon of light getting absorbed or scattered is significantly higher in the sea – this is why you can’t see very far under water, but you can often see many kilometres through the air. So, only if you are a very lucky photon of light, and have not been absorbed or scattered by the atmosphere, clouds, the water surface, particles, or the water, might you collide with a phytoplankton cell and be used in photosynthesis. If you are phytoplankton cell, you would therefore have a much higher chance of finding those photons of light and producing energy if you are close to the sea surface.

Now you have enlightening intro to the world of ocean optics! So why such a pessimistic title? In short: the particles scattering light in the coastal ocean are increasing in abundance and making the water darker. These particles (scatterers) come in all sorts of shapes and sizes, and from lots of different sources. These could be sediment grains, bubbles, other organisms, pollution, microplastics, just to name a few. In the case of a ‘darkening’ ocean, it is mostly driven by the tiny sediment grains that are washed off from land and out of rivers after heavy rainfall. These grains are small enough that they can stay suspended in the water for long enough to scatter away a significant amount of light, making life harder for phytoplankton. Other effects can be associated with these run-off events too, as pollutants and chemicals stick to these sediment particles and are transported out into the coastal ocean, where they normally shouldn’t be. 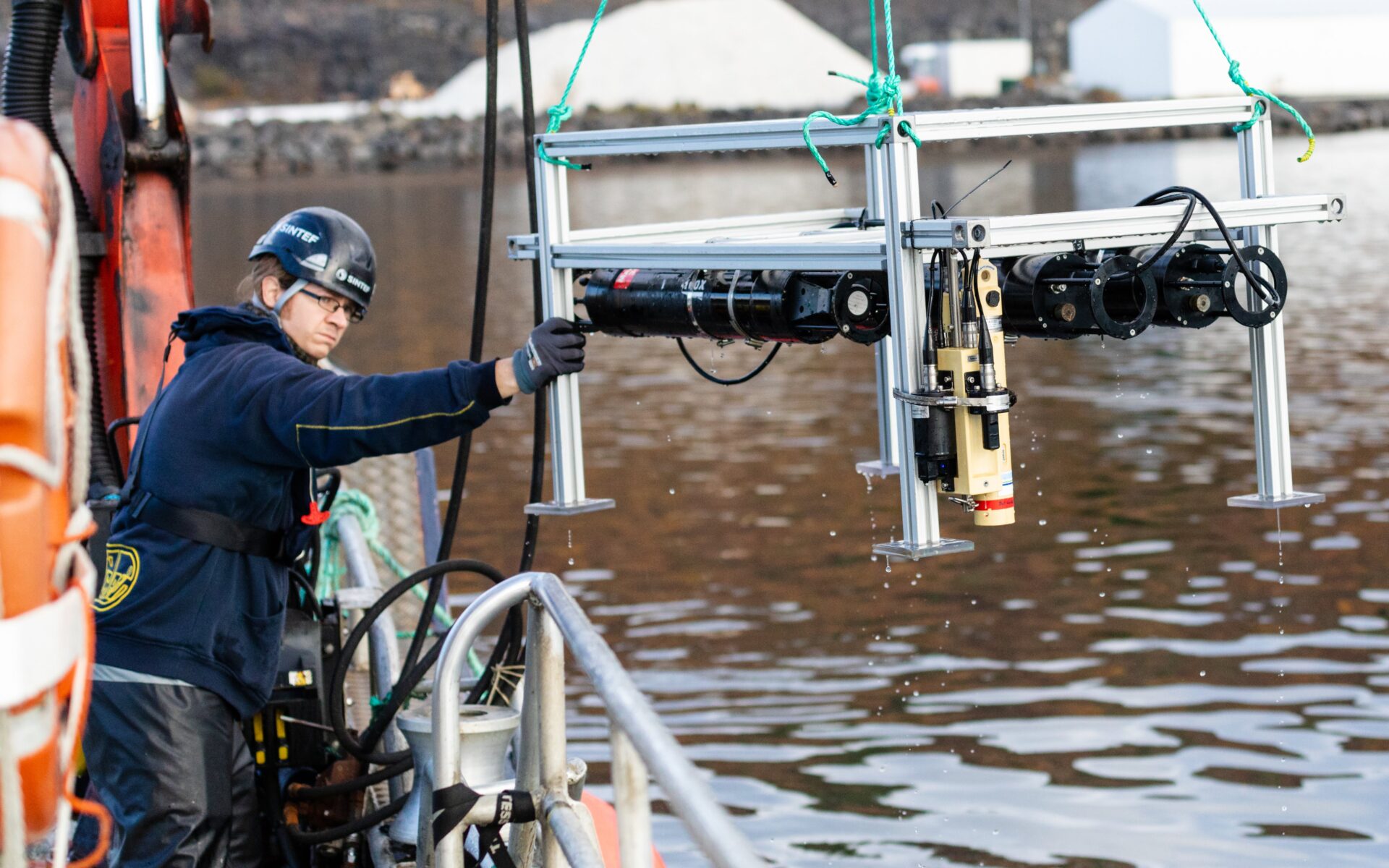 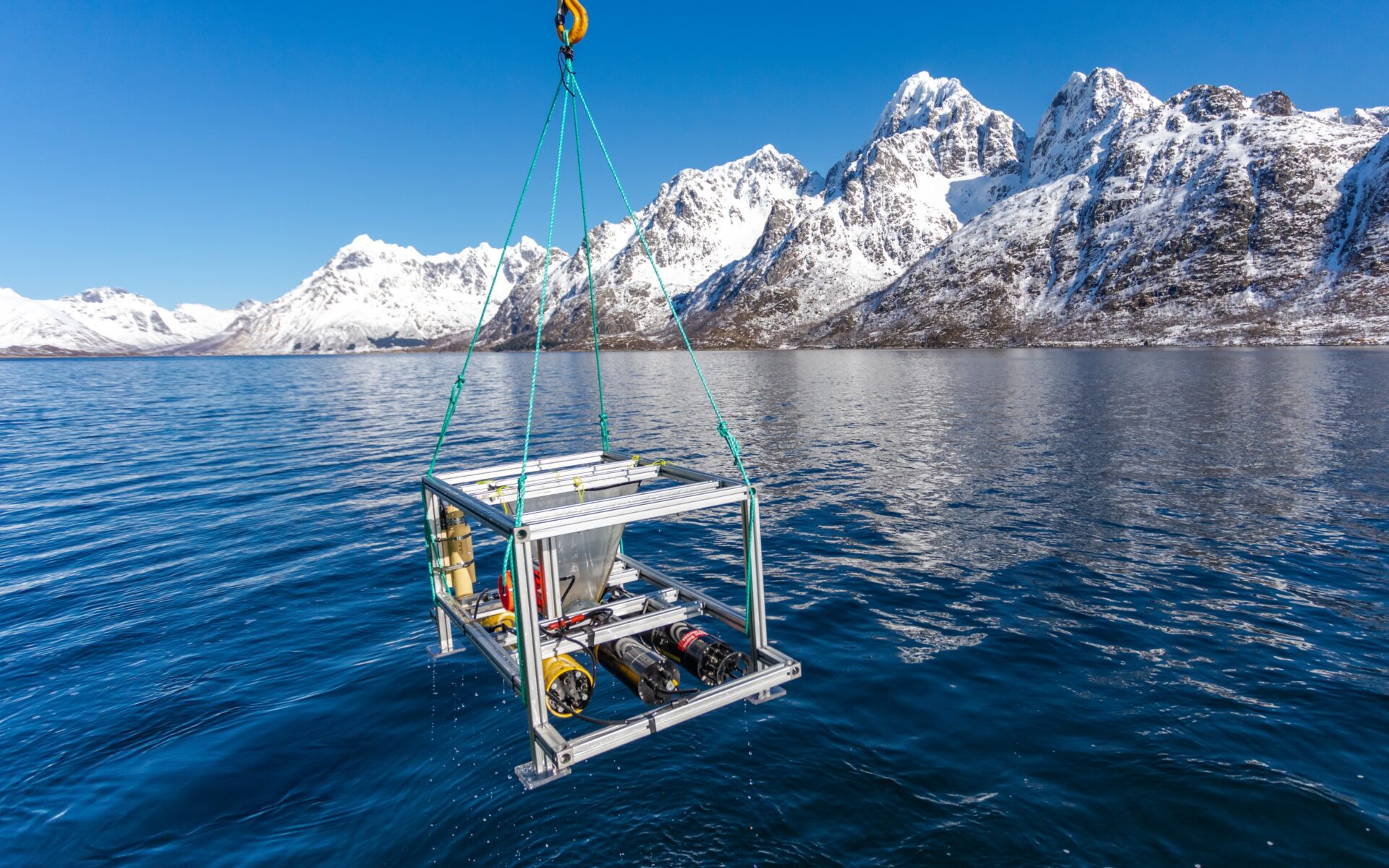 Measuring suspended particles in Frænfjorden (1st) and Lofoten (2nd) you can see the difference in water colour that is from the amount of sediment particles in the water.

Coastal run-off and sediment discharges into the ocean from land is not a new phenomenon, and can also help life by providing important sources of nutrients. What is changing, though, is the frequency and scale of these run-off events. Climate change is causing more extreme weather, and heavy rainfall is increasing the amount of sediments being discharged into the ocean. This can have consequences to the ecosystem in the ocean by making the ocean darker. We need to some really good understanding of the effects of this, and even explore eventual mitigation in order to protect and sustain the ocean ecosystem, which we rely on.

At SINTEF Ocean and NTNU, we are now underway with establishing new in-situ laboratory infrastructure in Trondheimsfjord, as part of OceanLab. One of the opportunities offered by the Observatory component OceanLab comes from the long-term time-series of light, particles, and phytoplankton measurements that will be critical for understanding the effects coastal darkening that I have explained here. From this, I hope that the new infrastructure can support research and technology development in this area, and help inform industry and coastal city policy decisions with global relevance to improving the health of the ocean.

Email Profile page
A darker future for our coastal seas? Trondheim's Marine Observatory: Two new arrivals to look out for this summer (2021)

0 comments on “A darker future for our coastal seas?”