The NOWITECH Innovation Award is intended to stimulate and reward knowledge-based innovation and / or entrepreneurship within the field of offshore wind energy. The award will help to identify ideas with commercial potential. There were many very exciting nominated innovations in 2016.

The 2016 award is given for the work on real-time hybrid model testing of offshore wind turbines. The winners 2016 have developed a truly innovative concept, demonstrated commercial viability and shown great prospect for cost reduction of offshore wind. The Prize shared among the winners is 10.000 NOK and a diploma each. 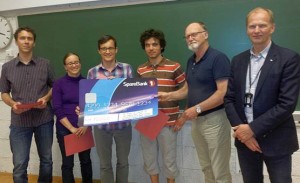 Next to the right Committee chair Oddbjørn Malmo, Kongsberg Maritime and John Olav Tande, SINTEF Energi. In the committee were also Daniel Zwick, Fedem and Per Arne Wilson, NTNU.