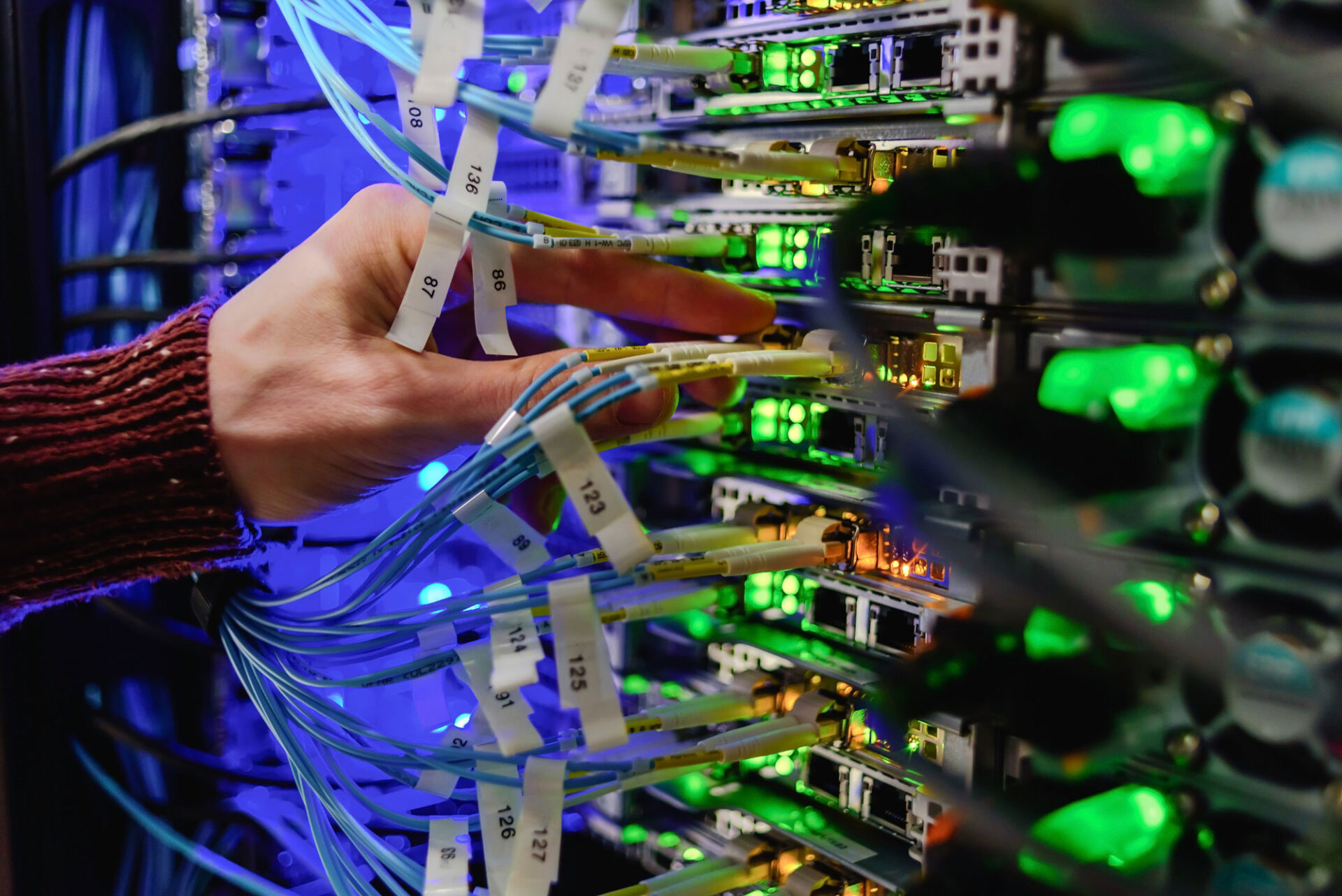 Do you think of crypto currencies and streaming services when you hear the word “data centre”? You’re not alone. But they are so much more than that.

Yes, they are the home of your favourite Netflix show. But videoconferencing, autonomous vehicles, smart cities, online banking services and health journals are just a few examples of products and services that require computational power from data centres around the world.

Over the past decade, the demand for computing power increased exponentially, making data centres a fast-growing industry. They are a huge part of what allows us to live our modern, digitised lives. And they are important enablers for more efficient services and the transition to a green economy. For instance, reducing travelling by facilitating an increased use of videoconference meetings, and enabling smart technologies that make our lives both greener and more comfortable. 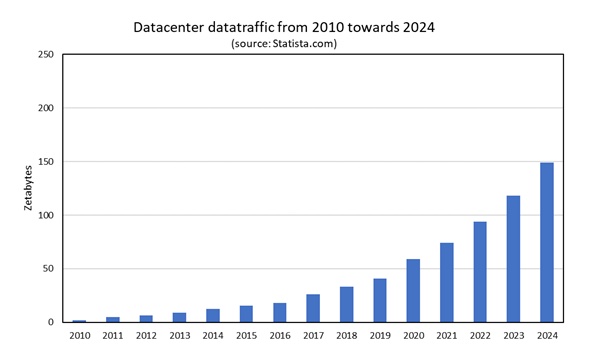 But there is a flipside to the coin: data centres use immense amounts of energy.

They already use more than 2% of the world’s electricity, and contribute to 2% of world’s CO2 emissions – equivalent to the world’s entire airline industry. This is in great contrast to the European Green Deal’s goal to make data centres climate neutral by 2030.

Data centres must reduce their climate footprint if we are to mitigate climate change. And many eyes look to Norway as a place that has both the infrastructure and natural resources to do that.

What is a data centre?

A data centre is essentially a dedicated space used to house computer systems for processing, distributing, and storing data. The typical data centre consists of IT equipment like servers, networking equipment like routers and switches, and storage systems. This is typically organised in the form of severs racks, which are arranged in aisles. In addition, data centres house cooling and ventilation systems, backup power supplies, as well as security, fire protection and monitoring systems.

How can data centres become more energy efficient than they are today?

From a climate footprint perspective, the need for energy and cooling are not problems in and of themselves. The problem is that most data centres’ cooling systems are inefficient. They use unnecessary amounts of energy. And although the heat removed by the cooling system is a valuable resource, it is rarely used for anything.

But what if the video meeting was streamed from a server running on hydro or wind power, had more energy efficient cooling and utilized its excess heat? Let’s take a closer look at how data centres can change from climate-foe to climate-friend, and why many think Norway might be the perfect place to build them.

Advantages and challenges of having data centres in Norway

Norway’s geography and natural resources have led it to become a large producer of renewable energy. In fact, 98% of Norway’s electrical production is renewable, and it has one of the lowest electricity prices in Europe. In addition, the cool climate allows for both very efficient cooling and a large potential for excess heat utilization (excess heat is also known as waste heat).

These advantages have not gone unnoticed by the industry, attracting leading data centre companies such as Microsoft and Facebook. This may facilitate the rise of a new Norwegian industry.

But a growth in the data centre industry in Norway will not come without challenges, and Norway would have to do more than just rely on its natural resources.

The need for more renewable energy production will increase: The Norwegian Water Resources and Energy Directorate estimates that the electricity consumption from data centres will grow from 0.8 TWh in 2019 to between 3 – 11 TWh in 2040.  More data centres will also cause challenges to the grid in terms of its capacity. Increased demand from various consumers is already causing the need to scale-up the electrical capacity. Examples of these are new emerging land-based industries such as battery production, electrification of offshore oil and gas platforms, and increased demand from households from electric car charging. Data centres represent a large share of the increased demand: between 2018 and 2019, about 50% of new requests to connect to the electrical grid came from data centres.

So why are data centres so energy intensive?

The simple answer is computational power and cooling.

The servers require large amounts of energy for computing. This energy is dissipated as heat within a relatively small area. And because the IT equipment is sensitive to high temperatures, the heat must be continuously removed.

As illustrated in figure above, the energy requirement for cooling typically accounts for a large share of the overall energy consumption in data centres.

The energy requirement for cooling depends on several factors, for example the cooling solution and where the data centre is located. In colder climates, the energy demand from cooling will be comparatively smaller.

The efficiency of data centres is often described by their PUE-values. Efficient data centres can achieve PUE values below 1.2. However, it is easier to achieve low values when the ambient temperature is lower, since little or no energy needs to be spent on mechanical refrigeration systems. This means that data centres located in Nordic countries have a natural advantage.

Still, a study showed that Nordic data centres achieve on average a PUE of 1.71, which indicates that there is still significant room for improvement. This can be done by choosing more efficient cooling technologies.

Cooling technology plays an important role in the effort towards making data more energy efficient. Not only does an efficient cooling system reduce the energy consumption, but it can improve the potential for utilising the excess heat by capturing it at even higher temperatures.

The choice of cooling technology is usually driven by investment costs and the need for high heat flux from the servers.

Air-based cooling systems
In these systems, cool air is supplied to the server rooms. The server racks are often arranged in so called ‘cold’ and ‘hot’ aisles, to control the airflow and eliminate mixing of cold and hot air.
Due to low heat capacity and heat transfer coefficient, air is not a very good medium for heat transfer, which results in high energy consumption, limitations to how close together the servers can be placed and a relatively low excess heat temperature.
Liquid-based cooling systems use a liquid such as water to dissipate heat. This can be done by circulating water in microchannels and exchanging heat in cold plate heat exchangers which are in direct contact with the server components.
Water and liquids in general have significantly better heat transfer properties compared to air. Liquid-based cooling systems allow for more compact data centres, reduced energy use for cooling and higher excess heat temperatures.
Two-phase cooling is an emerging form of data centre cooling technology. Here, the liquid coolant evaporates in the cold plate heat exchanger and the dissipated energy is stored as latent heat. This allows for even greater heat fluxes and coolant return temperature, and enables an even higher computational density.

Most data centres use conventional air-based cooling systems, which are simple and cheap. The downside is that they are not an efficient way of removing heat and therefore result in high energy consumption and low excess heat temperatures.

However, the market’s push towards building even more computationally intensive data centres has resulted in cooling methods which can remove more heat per area.

From an overall energy efficiency perspective, the choice of cooling technology should not just be based on cost and heat dissipation rates, but also on the potential for excess heat utilisation.

Excess heat utilisation – what are the possibilities?

No matter how energy efficient a data centre is, inevitably almost all its electricity consumption turns into excess heat in the end. Today, this heat is usually not used for anything. But it can actually be a very valuable resource if it is harnessed and used properly.

The challenge is that the heat has low temperature levels, making it difficult to utilise. However, as we have seen, choosing the right cooling technology can improve the potential to make use of it.

In general, there are two ways to utilise the excess heat: Direct use, or conversion to other energy forms or temperature levels, such as:

As seen in the table below there are several potential applications that can benefit from data centre excess heat. The choice of more efficient cooling technologies opens up for even more applications.

In urban areas, there is a great potential to use excess heat from data centres for district heating, as heat pump technology can lift the heat to the required temperature level. This potential has gained traction in the industry and several initiatives and projects are now being realised for this purpose, such as the use of data centre waste heat for district heating in Oslo. In this context, scientists are working with how urban heat sources, such as data centres, can play the role of “urban heatplants” and provide heat to local energy grids.

Other application areas are building heating and domestic hot water heating which can be achieved without the use of heat pumps. 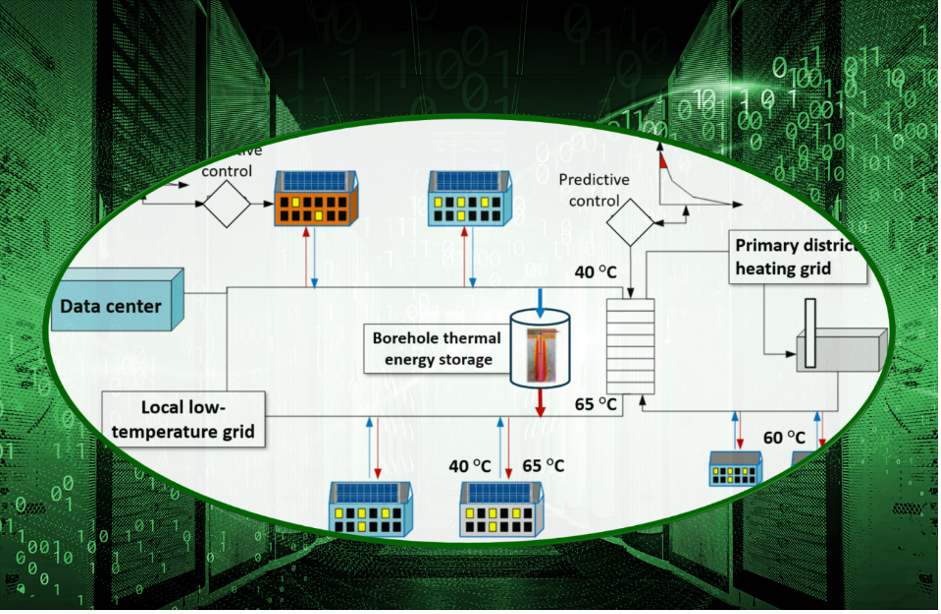 In many situations, it is advantageous for data centres to be located in rural areas due to the availability of space and electric power. Another advantage of such locations is the potential to use the local topography to achieve efficient cooling methods such as free cooling in mountains, or access to rivers or sea water. The downside of this is that the lack of potential urban heat recipients makes excess heat utilisation challenging.

Here, there is a need to raise awareness among data centre operators, the industry and local authorities about the excess heat potential of data centres. The establishment of data centres in co-location together with relevant industry that can make use of the excess heat, can lead to considerable energy and emissions savings. Examples of potential excess heat utilisation for industrial purposes include biomass processing, greenhouse food production and land-based fish farms.

The role of data centres in the future

The growing data centre industry will play an ever greater part in the society in the future. And even with measures to improve their energy efficiency, it is likely that their share of the global energy consumption will grow in the years to come.

A potential key role for data centres as large energy consumers today, is to become the energy hubs of tomorrow. As energy hubs, data centres can produce, consume and store energy, and come to good use for example by load-balancing the electrical grid to cope with peak demand. They can integrate electrical and thermal energy demands, and shift between these demands depending on seasonal changes. For example, in the winter a shift to heat can be made to accommodate increased demand for district heating, while during summer a higher fraction of electricity is delivered.

How can SINTEF contribute?

SINTEF Energy Research has great experience when it comes to improving energy efficiency and utilisation of excess heat. In for instance the FME HighEFF research centre, SINTEF scientists are working on how to achieve optimal integration of thermal energy storage for excess heat utilization, and industrial heat pump technology to efficiently upgrade the excess heat to higher temperatures with the smallest climate footprint possible. One of the technologies HighEFF is working on is to use CO2 as a refrigerant. How can that reduce a climate footprint? Watch the video to find out.

In FME ZEN, SINTEF is studying the integration between electricity and district heating and in FME CINELDI scientists are looking for solutions to improve the electricity grid capacity in a cost-efficient way, which will be important to get enough power to the data centres.