SHOP (Short-term Hydropower Optimization Program) is a scheduling tool for hydropower, developed by SINTEF and NTNU. It is used to schedule the production of hydropower one to two weeks into the future and ensures the optimal use of hydropower resources.

A new study carried out by Impello Management and Menon Economics shows that SHOP has increased the value of the water in Norwegian hydropower reservoirs by 2 per cent, or NOK 6.8 billion, in ten years.

Norway, despite its small size, is a major global energy supplier. Most Norwegians know how much the discovery of oil and gas on the Norwegian shelf has meant for social development and value creation in Norway. But we were already an energy-producing nation well before the oil boom.

This is because we have another natural resource, hydropower, which has been – and still is – an important foundation for value creation and a driver of social development. The right of reversion and other laws, which were updated in connection with the discovery of oil, have their origin in the days when Norwegian hydropower was being developed early in the 20th century.

The development of hydropower continued throughout the last century and became the foundation for an energy-intensive industrial sector in Norway. Hydropower development prompted the electrification that spread to the rest of Norwegian society, to households and, more recently, to a significant extent also passenger transport.

Today, Norway is well on its way to becoming the world’s first all-electric society. 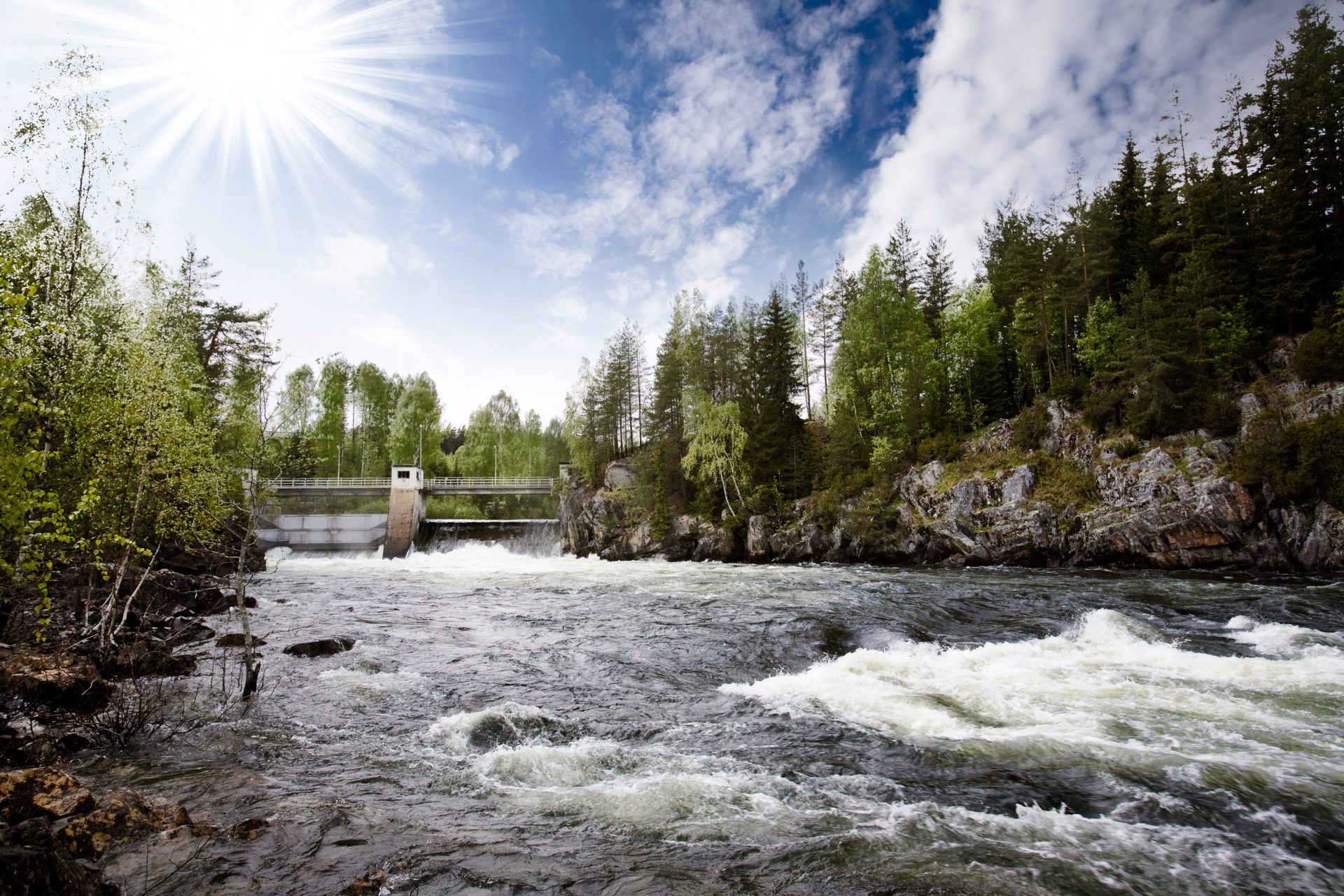 Energy generation is the largest contributor to climate change

Almost everything we do in modern society depends on a reliable supply of electricity. Access to energy is crucial to practically all the challenges and new opportunities we face today, including business opportunities, job creation, security, climate change and food production. This is why “To ensure access to affordable, reliable, sustainable and modern energy for all” is the UN’s Sustainable Development Goal No. 7.

At the same time, energy is the largest contributor to climate change due to emissions of CO2 and other greenhouse gases. A future, sustainable energy system must therefore include more energy from renewable sources such as hydropower, wind power and solar power.

We often forget that hydropower is renewable energy with distinctive characteristics

Wind power and solar power are often put forward as solutions to the climate change crisis. These are new, exciting technologies that must be developed and implemented on a large scale. In this context however, hydropower is often forgotten.

The fact is that hydropower to a major extent can contribute to reducing the negative effects of increased energy consumption worldwide. This is because hydropower, as well as being renewable, can be stored in the form of water in reservoirs and can be used when needed.

In energy systems, an instantaneous balance must be maintained between energy produced and energy consumed. Electricity from wind and solar generation can only be produced and consumed when the conditions are right or, in other words, when the sun shines and the wind blows.

However, it is rarely the case that consumption is perfectly correlated with sun and wind conditions. Hence, the renewable energy system of the future must include a buffer, and this can be provided by hydropower, thanks to its storage potential.

Hydropower is special because it can complement the other renewable energy sources and thus facilitate the use of those sources to the extent necessary to attain the sustainable development goals.

Extensive experience at SINTEF and NTNU

Throughout the long history of the development and operation of hydropower plants in Norway, it has been necessary to develop extensive knowledge on hydropower scheduling. SINTEF, in collaboration with NTNU, has carried out research and developed methods for scheduling of hydropower generation for more than 40 years.

Methods and tools which we have developed are in widespread use by hydropower companies in Scandinavia and are an integrated, business-critical element driving the operations of the majority of Nordic power companies. In particular, the SHOP tool, developed as a result of a number of research projects led by SINTEF, is an important building block in achieving the optimal management of Norwegian and Scandinavian hydropower resources.

SHOP is a software tool that includes advanced algorithms for preparing detailed production plans, based on information about water inflows, market prices and load. SHOP makes it possible at all times to attain the highest possible value from the water resources available in the reservoirs. The study mentioned at the beginning of this blog demonstrates that SHOP contributes to a 2 per cent increase in the value of hydropower production by optimising generation and flow in water systems.

The value realised through the collaboration between the hydropower industry, SINTEF and NTNU, has already repaid many times over the funds invested in research and development. We have developed world-leading knowledge in Norway as a result of a number of research projects ranging from fundamental research into mathematical methods for calculating the value of water stored in reservoirs to development projects enabling streamlining of the industry’s implementation of new tools and methods.

The  study carried out by Impello Management and Menon Economics estimates a realisable future potential value of NOK 12 billion if more Scandinavian power companies start using SHOP. Further gains can be generated when the close co-operation between industry and research addresses new challenges related to the role of hydropower in the sustainable energy system of the future.

Planning hydropower generation is a research field in its own right because it involves major mathematical problems in combination with technical know-how regarding the operation of turbines and generators and the flow in hydraulic systems, as well as forecasting of inflows and market prices.

Hydropower scheduling  is a field that combines knowledge  from several disciplines. It is also faced with the challenge of having to handle both long times horizons and very fine time resolutions.

Deciding on optimal outflow from a hydropower reservoir is no straightforward task because it is always necessary to consider the alternative cost of immediate release versus saving the water for later use.

Calculating this alternative cost requires consideration of all the future ways in which the water may be released. In the case of large reservoirs in which water can be stored for several years, this means that immediate release and power generation must be compared to  release and generation perhaps two years in the future.

At the same time, the production patterns selected now also have short-term effects because they may involve changing the flow of rivers and the water level in the reservoirs, which may affect animal and fish populations and the environment in and around the water system. The planning tools must therefore handle fine time resolutions. The need to maintain at all times a balance between production and consumption also affects the time resolution provided by the modelling.

To handle these complex issues, the research carried out by SINTEF and NTNU has resulted in several tools that target different aspects of the hydropower scheduling problem. Different parts of this model hierarchy are fully operational in the Norwegian and Scandinavian hydropower industry.

SHOP: A tool for short-term planning (1-2 weeks in the future)

The SHOP tool, which is highlighted in the study, is used to plan production 1-2 weeks in the future. The fundamental concept is a tool that optimises hydropower generation based on a detailed description of the reservoirs,  water courses and installed technical equipment.

SHOP takes into account a range of different possible water system topologies, as well as technical and environmental concessionary restrictions. This results in production schedules that can be implemented in practice with little or no modification.

SHOP originated in the 1990s

The main principles of the SHOP program were established by Olav B. Fosso in 1989 and developed in a doctor’s thesis by Michael B. Belsnes in 2008. This year a new doctor’s thesis that describes the current, modern version of SHOP will be submitted by Hans Ivar Skjelbred. I presented my own thesis on 1 February 2019, the theme of which was how SHOP can provide support for trading in sequential electricity markets.

Based on this research we have developed a tool that is used in daily operations in the Scandinavian power generation industry. This provides competitive advantages for Norwegian industry. Managing renewable energy sources in a rational manner is crucial for implementing the changes necessary to attain the Sustainable Development Goals on a global basis.

SHOP and the hydropower models developed by SINTEF and NTNU have a long and proud history, as well as being widely used in the Norwegian hydropower industry. Does this mean that we have solved all the problems in this field?

The answer is no. SINTEF has ongoing research and development projects in collaboration with Scandinavian and, more recently, European, electricity producers. These projects are contributing to existing know-how and improvements in tools in order to meet new challenges linked to a changing energy system.

Ever closer integration between countries, as well as increasing shares of intermittent, renewable sources such as wind and solar power, creates new challenges and opportunities for hydropower.

An important question is how the energy market will develop and how this will affect the operation of hydropower plants.

The market for energy should be adapted to the production technologies that exist in the market. An energy system based on wind, solar and hydroelectric power will have different properties from those of a system based on conventional technologies such as coal, gas and nuclear power stations.

New research issues which are far from being resolved are, for example:

The deregulation of the Scandinavian electricity market in the 1990s created a range of new challenges both for energy producers and for system operators. The models developed by SINTEF and NTNU were adapted and designed to make it possible to respond to these new issues.

Hence, we possess knowledge both of market solutions and of the operation of hydropower in a changing energy system. Experience from deregulation is an important starting point for future research in hydropower planning and market solutions for energy.

In addition to the transition to a renewable energy system, there are other trends that will also manifest themselves in the near future. Increased monitoring and acquisition of large amounts of data from the energy system mean that there is considerable interest in researching the potential for combining computerised methods with existing know-how and methods for hydropower planning and energy system analysis.

Finding areas of application for computerised methods associated with hydropower planning may further increase the potential for value creation through better management of resources.

In Norway we are in a special position because our electricity supply comes mainly from hydropower, which is a renewable resource. The study carried out by Impello Management and Menon Economics shows that the use of SHOP has resulted in increased value creation in Norway due to the optimal use of hydropower resources.

Internationally, the situation is quite different: To meet the sustainability goals, a much larger proportion of the energy consumed must be produced from renewable sources.

With our unique know-how in the field of hydropower scheduling and market solutions for energy, modelling tools developed jointly by the Norwegian hydropower industry, SINTEF and NTNU can help promote the development of a sustainable energy system in large parts of the world. In the UN’s Sustainable Development Goals, access to electrical energy is described as an important factor affecting, among other things, financial growth, health and security.

Collaboration with research establishments and the power industry in other countries where there is potential for more hydropower, is therefore the next step. Together, we can then overcome the challenges and find potential for hydropower in interaction with other renewable energy sources in a future sustainable energy system.

1 comment on “SHOP: How hydropower scheduling creates value now and in the future”