Each year, the SF6 -insulated Substation User Group reports to the Norwegian Environment Agency regarding its inventory (in both switchgear and storage) and emissions of SF6 gas. In this blogpost I will present the trends observed in both inventory and emissions during the period 2003 to 2018.

SF6 is a potent greenhouse gas

SF6 is a gas used as an electrical insulator and current-interrupting medium in high-voltage circuit breakers and other high-voltage installations. The gas is inorganic, colourless and odourless. It is non-flammable and non-reactive, but is a very potent greenhouse gas.

The emission of 1 kg SF6 is as harmful to the environment as 22 tonnes of CO2.

Emissions may result from equipment breakdown or failure, or in connection with work on components or ordinary service. Switchgear that is not sealed for life will always emit a small volume of the gas during its lifetime.

An SF6-insulated substation (pictured above) consists of a series of individual components installed in close proximity and connected using copper or aluminium conductors. Various types of components, such as circuit breakers and  disconnector switches are used to change the grid configuration and/or clear faults. Substations at the highest voltage ratings (145-420kV) typically connect between three and ten power lines and transformers. 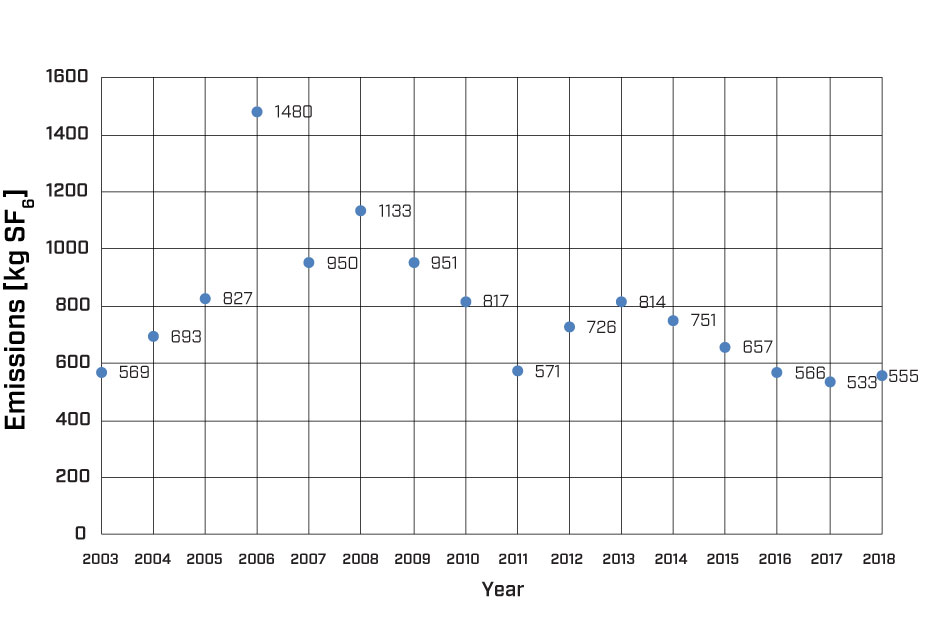 Observant readers will note that levels of SF6 emissions in 2003 and 2018 are virtually identical. The reasons for this are under-reporting in 2003 combined with the fact that there has been an increase in the number of companies submitting reports. We know also that the quality of reporting has improved significantly since 2003. Another important statistic is the ratio between gas emissions and the amount in use in the substation. This ratio is falling, and is now less than 0.20% (see the table below).

The distribution of SF6  gas in use in substations owned by User Group members is shown in Figure 2. Most is found in larger Gas-Insulated Switchgear (GIS) and in free-standing circuit breakers.

Figure 3 shows the distribution among component types for SF6 gas emitted in 2018. GIS and free-standing circuit breakers emit the largest amounts. The proportion of “Others” in Figure 3 includes emissions such as those from members that have no substations at all or only laboratories, as well as emissions from components that do not belong in the other categories.

The User Group  is a special interest group organised in the form of a project at SINTEF Energy Research. It is created by the owners and suppliers of SF6-insulated switchgear. The group focuses on 145-, 300- and 420 kV-rated grid infrastructure, as well as companies that market goods and services for these installations.

The User Group has 46 members, 33 of which have reported emissions. These include both grid companies and electricity producers, as well as equipment suppliers, oil companies and research institutes. The manufacturers of SF6-insulated plants have their own system of reporting to the authorities, and are not included here.

The aim of the User Group is to help to ensure that experience and issues linked to the operation, maintenance and development of SF6-insulated switchgear plant are exchanged, clarified and communicated between plant owners, suppliers, the public authorities and other interested parties. The User Group organises the reporting of SF6 gas inventory and emissions to the Norwegian Environment Agency.

What is the user group doing to reduce emissions?

A users’ seminar is held every other year. The seminar includes presentations on relevant topics such as new gases, new technology and practical experience from the operation and maintenance of SF6-insulated swichgear.