Wow! What a day at COP: starting off with our presentation of the NORDICCS Roadmap and BIGCCS results on Hydrogen, ending up with a message from the Minster of Climate and Environment that Norway will now open up for CO2 storage in the North Sea as a negotiation card for the climate agreement.

Wait a second, this is the message we gave at the Arendalsuka this year in an event hosted by the Norwegian Research Council. And we have regurarly hammered down this message through the SINTEF and NTNU roadmap for CCS in Norway, and op-eds and the story goes on and on….

Great! These are the steps Norway (and other countries owning non- contentious storage resources) need to take: sharing. I guess it could be seen as the new addition to the sharing economy: sharing storage. After all it has all the characteristics of something you could share, low usage and vast resources, like an Airbnb for CO2. 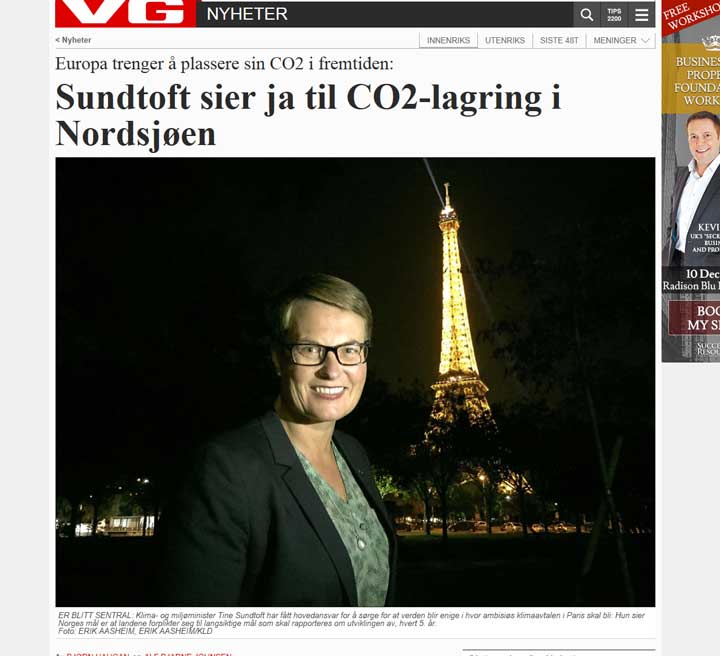 USA’s EPA director Gina Mc Carthy made a presentation in the US Pavilion focusing on the Obama energy and climate plan. The format is somewhat unfamiliar to a native (and naive) Norwegian. It was almost like a revival meeting, or like she was running for President. Anyway, it is refreshing to see how the Americans are arguing for climate change mitigation; saying it is about our welfare, health, economy and security. Giving a positive message, not just doom and gloom.

Giving a positive message, not just doom and gloom.

I fully subscribe to this way of communicating climate change mitigation. Climate sceptics try to sell us the story that it will ruin our welfare and economy. It’s quite the opposite you see.

Rumours from the negotiations are seeping into the observer area as well. The joint stand of Bellona, Yara and CICERO is a natural gathering point for Norwegians, besides the delegation area of course.

You meet up with people like Hanne Bjurstrøm, Christian Rynning Tønnesen, Børge Brende, Kristin Halvorsen, Erik Solheim, Anita Traaseth, Oluf Ulseth, Nikolai Astrup. Everyone is curious to what the final text will be. My impression is that the French have really made good preparations for this COP event with hectic diplomacy and a strict timetable for the progress of the accord text.

Most people think there will be an agreement and that it will contain the INDC’s, however the 2 degree target seems to be hard to agree to in the context of stepping up the effort. Some states want the 1.5 degree to be mentioned, which is perfectly understandable if you for instance live in Tuvalu, but realistically we have already lost that milestone, some think the 2 degree also. It’s all about compromises in shaping this new agreement, and countries seen as filibustering the process will probably be consulted by key countries to see what leverage there is.

Some states want the 1.5 degree to be mentioned

It’s a process where everybody needs to agree, one country could potentially blow the deal. There is ample space for dewatering the content or dispute specific paragraphs in the accord which at present has around 500 brackets kept open for alternative formulations.

It’s a process where everybody needs to agree, one country could potentially blow the deal.

Solar vessel: It doesn’t get cooler than this

The day ended at the solar vessel “Race for water”- a 100% electric ship with a PV surface of about 500m2. It is kind of the sibling of the SOLWAY plane and it has made a trip around the world on solar, batteries and electric motors. It doesn’t get cooler than this, and it will surface in a James Bond movie soon. One of the missions was to put focus on plastic waste on the seas and the example of Midway was brought to our attention. Due to the Pacific Ocean streams, plastic turn up there in an alarming amount, killing birds and causing animal tragedies. We have the same problem at Spitsbergen where the Golf stream brings garbage to the beaches causing many problems. 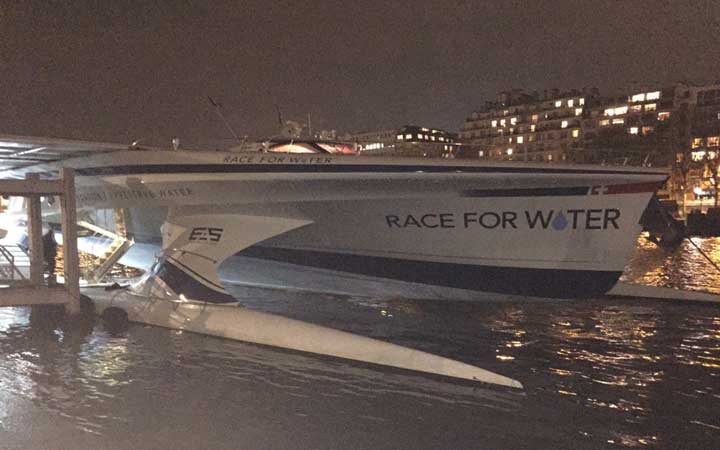 Basically we must stop treating the oceans as a hiding place for all debris we want to dispose of.

Basically we must stop treating the oceans as a hiding place for all debris we want to dispose of. And it goes for us all. Hurtigruten Cruises  gave a presentation highlighting climate friendly solutions for the fleet of ships and eco-friendly tourism. It’s refreshing to hear that the vision of Hurtigruten is emission free sea transport and wanting to progress to this. It’s high time that maritime and air traffic becomes part of such agreements like the prospective Paris accord. And that the ship owners ask for this to happen.

All in all a very good day at work, I am really wondering if the politicians are now listening to the advice from the scientific community. Or is it all is coincidence? – I believe not.