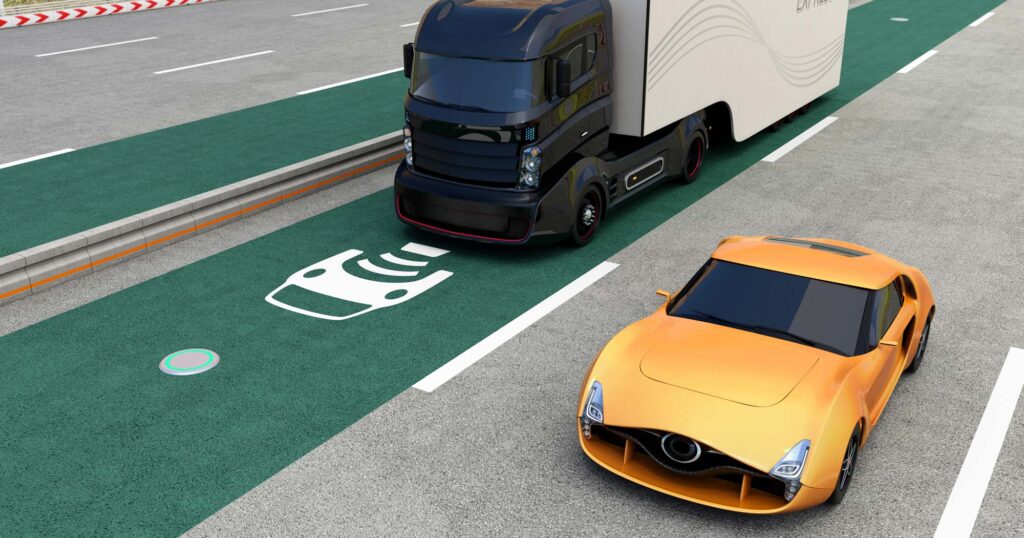 In the future, it will be possible to charge electric vehicles while driving them. This technology is called wireless dynamic charging, and involves coils under the asphalt and in the vehicle. The advantages are the obvious economy of time, cars that require smaller batteries and the removal of wires. In theory, it’s possible to reach infinite range with this technology, but there are also several challenges. One of these challenges is that we don’t know enough about the consequences of such wireless charging on the power grid.

How does wireless dynamic charging affect the grid?

A report by the Institute of Transport Economics forecasts that most vehicles in Norway will be electric by 2050 – 99% of the short vehicles (under 5,6 meters), 98% of the medium vehicules (between 5,6 meters and 7,6 meters) and 75% of the long vehicles (above 7,6 meters). This will result in a dramatically increased strain on the power grid.

Regardless of which charging methods become commonplace as electric car technology develops, we need to model and establish how the different solutions will impact the grid. In this way, we can ensure that we end up with the most socio-economic combination of charging solutions.

Research project FuChar – Grid and Charging Infrastructure of the Future – attempts to answer the question: how will a wireless dynamic charging system fall into place with the existing electric consumption in a given area?

To find out the answer, we studied a 6,5km long strech of road south of Lillehammer. The study showed that wireless dynamic charging in 2050 would result in a 6 MW increase in load on the distribution network. We also observed that the overlap between household consumption and wireless charging would be small, both throughout the day and throughout the year.

In other words: in the planning of the electric grid of the future, power demand from dynamic charging will need to be considered in combination with the existing power demand in the area, to ensure the grid isn’t overdimensioned. Such an approach will result in smaller investment costs, and a more socio-economic use of the grid.

How we worked with dynamic charging and household demand

In this study, we devised a method to aggregate the demand from wireless dynamic charging together with existing demand from households in the area. We focused on three research questions:

The power demand linked to wireless dynamic charging needs to include all types of land-based electric vehicles; not just cars. Household load profiles are created by using standard profiles, which need temperature data for the area, yearly average energy consumption and number of households. A more detailed explanation of the load profiles can be found in our scientific article: A proposed methodology for modelling the combined load of electric roads and households for long-term grid planning.

The method we used was a case study, where we assumed a 6,5km stretch of road on the E6 south of Lillehammer would be retrofitted for inductive charging (see illustration 2). We also assumed that all electric vehicles driving through the area would receive a charge of 40 kW. The area around the stretch of road has about 700 households.

The load profile for the electric vehicles was subdivided between short, medium and long vehicles based on numbers from NTP, and data from the Norwegian Public Roads Administration (Statens vegvesen) about the number of vehicles passing through the area during a year.

We ran simulations for 2025 and 2050, with different proportions of electric vehicles, but a similar household power demand.

How many MW would wireless dynamic charging require?

How do the different loads correspond?

Illustration 5 shows how the household load varies compared to the load from short electric vehicles during a period of a week, in March. The two profiles have their peaks at different times of the day, and the weekly variation is also different.

The load factors that show how household load and inductive charging load vary throughout the year, relative to maximum load, is shown in illustration 6. Households have a high power demand in the winter because of heating, while the demand from wireless dynamic charging will be higher in the summer because there are more vehicles on the road at that time.

These are good news for the grid: when the maximum for the two different loads comes at different times, the grid is less strained than if they coincided. This variation should be taken into consideration when the power grid is scaled up for future wireless dynamic charging.

Wireless dynamic charging as a technology is still in its demonstration phase, and it is uncertain to which degree it will be adopted in Norway. But the technology exists, and it is conceivable that it will become a part of the important solutions that will be required to meet the large charging infrastructure demand in the coming years.

There are however several points that need to be examined further before conclusions can be drawn:

This blog is based on the research article titled A proposed methodology for modelling the combined load of electric roads and households for long-term grid planning, which was presented at the EEM-conference in 2020.
FuChar is a KPN project under the Research Council of Norway‘s ENERGIX program. The project is financed by the Research Council of Norway, Agder Energi Nett, Elvia, Haugaland Kraft Nett, IONITY, Istad Nett, Norsk Elbilforening, NVE, Skagerak Nett and The Norwegian Public Roads Administration. R&I partners in the project are SINTEF Energy Research (project lead), SINTEF Community, NTNU and UPC.

0 comments on “How will wireless dynamic charging of electric vehicles impact the grid?”