Further reducing emissions from the energy-intensive ferroalloy industry is an important step in reaching our global climate goals. Born out of the HighEFF research centre, the NECast project will evaluate the potential of a new casting process for this important industry. 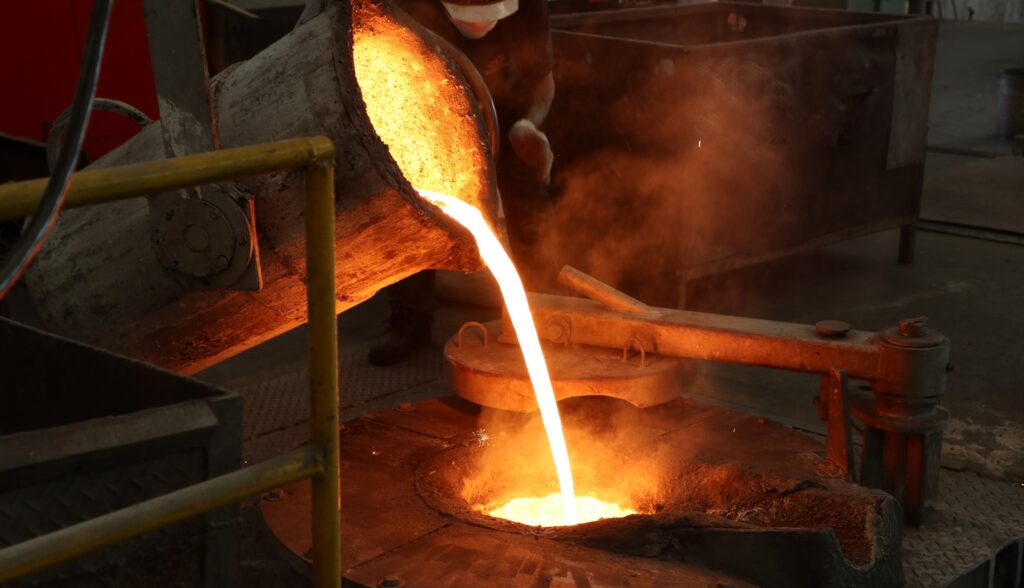 Ferroalloy production is one of Norway’s largest and most important industries, standing for around 23% of electricity consumption and 20% of GHG emissions from our land-based industry[1].  Many successful measures have already been taken to reduce its environmental footprint, but significant improvement potential remains if we look in the right (new) places.

Looking for savings beyond furnace design

Furnaces are the largest source of emissions and energy loss in ferroalloy production. The largest energy and emission savings up until now have naturally been made through improved furnace design and operation. Some plants (like Elkem Thamshavn and Finnfjord) have also installed  Here, captured heat from the off-gas is converted to electricity in a steam cycle, which increases the energy efficiency and reduces the operational costs of the plant. In fact, such systems can recover approximately 25% of the electricity demand of the furnaces.

Although several positive developments have taken place in the past, the industry should continue to look for solutions to further reduce emissions and increase energy efficiency. Not only because it is necessary in order to reach our climate goals, but also because it can contribute to increased value creation and income. Some customers in the ferroalloy industry have already started to ask for certificates of green production and in the future this is expected to give an even bigger competitive advantage. Additionally, direct utilisation of surplus heat could be a catalyst for the development of industrial clusters, where the previously wasted heat could generate revenue for the industry.

To reduce energy loss and emissions even further, it is necessary to look at new parts of the production line. The casting process is the second largest surplus heat source in a ferroalloy plant and typically stands for 20-40% of particulate emissions, making it a natural place to start.

Even though a substantial amount of heat is lost from the molten metal, energy recovery is not the largest incentive for the industry to pursue new developments of the casting process.

The significant particulate emissions associated with tapping and casting reduce the quality of the working environment and represent a safety risk for plant personnel. Some plants have already been instructed by the government to re-design their casting process and new systems for dust handling will therefore be implemented in the near future.

Such investments are associated with additional costs, but also represent an opportunity to implement state-of-the-art technology that can give a competitive advantage. By including several new improvements already in the design phase, the risk of sub-optimisation is reduced and installation of costly retrofit solutions at a later stage can be avoided. There are several aspects that should be considered in the next generation ferroalloy casting process, including:

There are three main options for utilisation of the heat that can potentially be recovered from the casting process. The most efficient alternative is using the heat directly to cover heat demands either inside or outside the ferroalloy plant. If the temperature of the recovered heat is too low, upgrading the heat in a heat pump is an alternative. However, the temperature of the molten metal as it enters the casting process is approximately 1450 °C, meaning that heat can be recovered at quite high temperatures. The high temperature also enables efficient heat-to-power conversion, which is a highly flexible option for utilisation.

Is the solution viable?

The envisaged next generation casting process is currently in the idea phase and will require further research and ultimately industrial demonstration to prove its viability. The new NECast project will be a starting point for these investigations and aims at evaluating the concept on a system level both with regard to industrial suitability and energy recovery potential.

NECast is a project within the Novel Emerging Concept program of the FME HighEFF research centre (Centre for an Energy Efficient and Competitive Industry for the Future). NECast started in August 2020 and will be concluded in May 2021.

0 comments on “Next-Generation Casting Process for the Ferroalloy Industry”