Remember that movie “American Grafitti” (Siste natt med gjengen)? Same feeling here, leaving the COP21 while everyone is waiting in anticipation. But more about that later.

Discussing 1.5 degree is bizarre without rolling CCS out in an unprecedented scale. 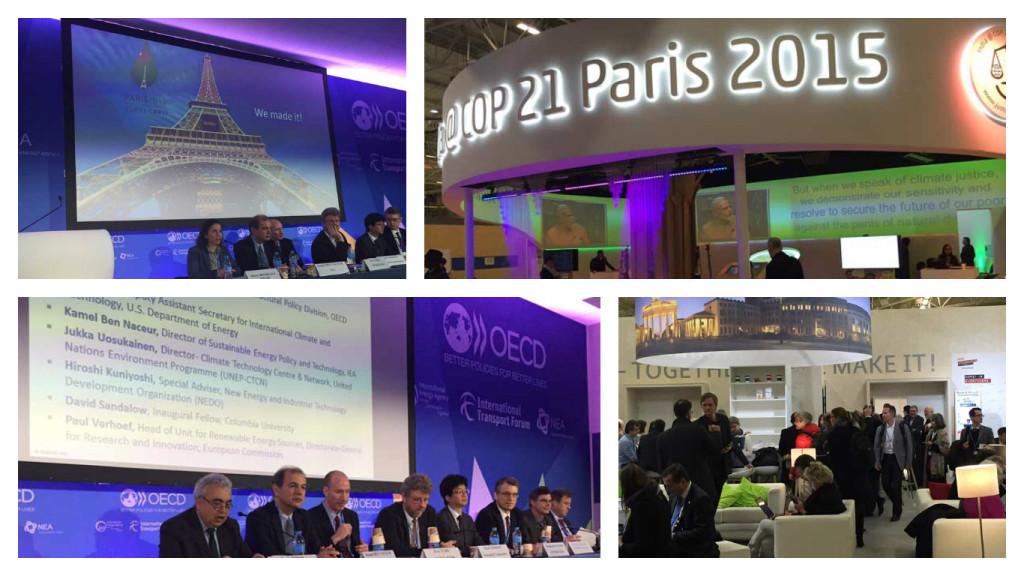 Issues on incentives and bioccs + the urgent need was discussed. A good phrase was coined “All models love this technology but nobody wants it”, because no models can give 2 degree without CCS. Discussing 1.5 degree is bizarre without rolling CCS out in an unprecedented scale. A heated debate materialised from an intervention from the audience. A  woman from the Italian Government (pink badges) said she had lost all faith in CCS and was not happy about the incentives CCS needed. Both David and Frederic tried to comment and with an Italian interpreter in between it became quite amusing. Until Frederic said he has sued the Italian government for falsified certificates for PV, a lawsuit of €100 million. A lively discussion continued and persisted outside the lecture theatre- with two interpreters- interesting!

Chemical engineers can solve everything?

Right, off to Hall 4 where Imperial College, Grantham Institute, GCCSI, Carbon Trust and the Institution of Chemical Engineers (IChemE) discussing energy modelling and a new report on decarbonising the world. It also has links to the Mission Innovation initiative. Breaking news- it’s cheaper to decarbonise earlier than later!

Somewhat alarming messages from the GCCSI stating that we will in 2040 still have 75% fossil in our energy mix. A Danish professor seemed to disapprove strongly and the IChemE chair convinced us that chemical engineers are the best people on earth in solving virtually all problems.

Being a mechanical engineer I left the theatre thinking it’s good we have so many engineers of this breed in SINTEF.

Selfie with Kerry – Not a smart move

Curious to see what is happening at the Bellona, CICERO and YARA conference room I bolt back through Hall 3 towards Hall2 and in a somewhat narrow corridor I see a wall of very determined people coming at a pace towards me. And in the middle the familiar face of US Secretary of State John Kerry. My instinct (or rather the cry for more pictures from our communications director) tells me “take a picture” and I raise my hand to grab the telephone which is in the inner left pocket of my jacket.

Not a smart move, an officer unmistakably disapprove of this movement and luckily my instinct tells me “no”. Hands deep in my trousers pockets I witness the parade passing me while squeezed towards the wall. Brilliant manoeuvre and lesson learnt there.

I meet up with my good friend John Gale General Manager of the IEAGHG and we start discussing UK energy politics which at present is behaving strange. Cut in subsidies for renewables, support for small and large nuclear, withdrawal of the £1Bn for CCS and effectively dismantling the contract for difference regime. Which I found to be a really smart system creating investor confidence in low carbon energy.

I trust it is all elements in a grand scheme we cannot understand. Lord Nicolas Stern is here as well, and he spoke about the Global Apollo Programme. This is the foundation for the Mission Innovation initiative brought forward by USA, France and India with support from the UK. Guess what the message is; Invest now in research and innovation to boost technologies to deliver electricity costs below coal. Furthermore that international co-operation is key, the gap is too large for one country to close.

Hmm, sounds familiar, and it’ s much cheaper of course. Guess what Prof. Jeffrey Sachs from University of Colombia said? Well, we have to learn from politics, the same message must be repeated in time and space for something to happen.

A new climate deal? 18 years since that happened

Last session today was IEA/OECD on leveraging R&D to meet the energy and climate transformation. Really happy to meet Kamel Ben Naceur of the IEA again, he is now director of sustainable energy policy and technologies in IEA. He is pushing for the “first of fuel”- that is IEA language for energy efficiency. This is the most powerful tool we have in climate mitigation, to avoid waste of energy. Industry and buildings have a lot to gain here and to make it tangible it is called “first of fuel”- the one you should use first and to be mandatory. They also repeated the message of the need to decarbonise now and to cooperate on research and innovation…

Energy efficiency is the most powerful tool we have in climate mitigation, to avoid waste of energy.

All good but unfortunately I had a plane to catch so I had to leave earlier than expected. Again there was a lot of enthusiasm about the Mission Innovation- quote “The COP has already delivered results- a technology innovation initiative”. Recharging my somewhat aging laptop at the Norwegain corner there is Jan Egeland arriving to talk about climate and migration. Alas, can’t get it all I guess, need to leave.

But before that some consultation with Steffen Kallbakken and Asbjørn Torvanger of CICERO about the negotiations. New text expected this evening, a high ambition group has been formed to push for a more ambitious plan. USA and India is talking. Loss and damage is a tough debate and international transport has disappeared from the draft text. This toghether with climate resilience is debated heavily at the COP.

The COP has already delivered results- a technology innovation initiative

Who is going to pay for climate adaptation in poor countries? Remember we already have 1 degree warming. This is a topic for more research it is said – indeed. Good that we have the Klima2050 SFI in SINTEF and so much competence on buildings and infrastructure. We should link up with low income countries and deploy the knowledge. 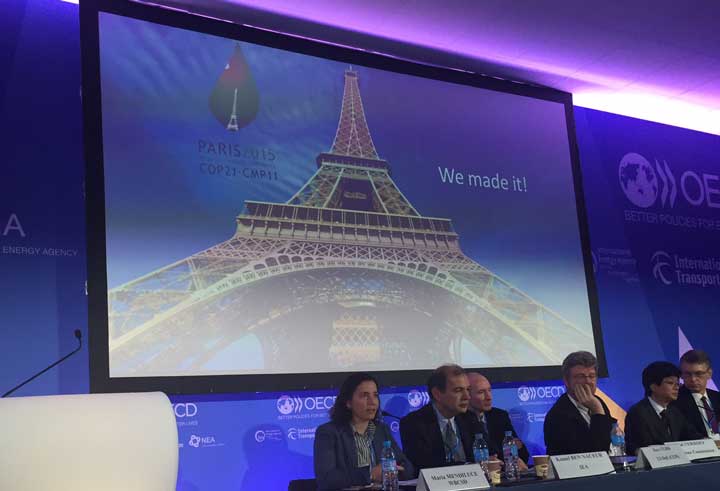 Only 2% of the global emissions are likely to not be part of the Paris agreement versus 11% being a part of the agreement in Kyoto. Seems like we will have us a new international climate deal, it is actually 18 years since that happened.

Seems like we will have us a new international climate deal, it is actually 18 years since that happened.

Hope for an ambitious outcome of COP21

Routinely late for the plane I run off to the hybrid bus which will take me to the electric train. Looking back it is like American Graffitti– feeling kind of blue leaving. The people which are there are yearning for a climate deal and one which will bring the lowest possible temperature increase.

I see people in saris, in suits, with turbans and in puruvian national costumes, they are all there hoping for an accord.

Time will show, but we are probably talking 24-48 hours from now before we will hopefully see white smoke from the negotiation area. The place is now invaded by the press eager to pick up the results and what is happening towards the end of the negotiations. I wish the negotiators and the French foreign minister Laurent Fabius all the best of luck, and hope for an ambitious outcome. And I look forward to wear jeans and a casual shirt again and to meet with all the skillful people we are so lucky to employ. Especially the glorious chemical engineers which will solve it all, possibly with a little help of the mechanical engineers, the ICT engineers, all other type of engineers, perhaps economists and if God will social sciences and the legal people.