The increase of greenhouse gases in the atmosphere amplifies its ability to retain the heat received from the sun, causing an increase in global temperature. Over the past several decades, scientists have made solid links between global warming due to green house gases and change in climate in varying scales and magnitudes in many parts of the world. Carbon dioxide has been the major greenhouse gas emitted to the environment at an alarming rate since the Industrial Revolution due to burning fossil fuels.  In order to decelerate global warming, capturing and storinging CO2 in permanent storages, also known as sequestration, has been identified as a potential successful solution to reduce CO2 emissions to the atmosphere. 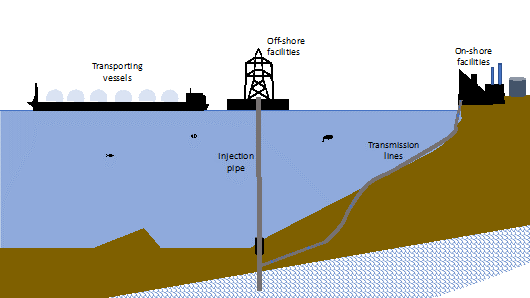 Norway has been a pioneer in sequestering CO2 in geological storages. The Sleipner and Snøvhit fields are two successful projects where more than a million tonnes of CO2 have been stored in storages to date. With the success of these projects and the support of the Norwegian government and industry, yet another large-scale project on storing CO2 on its continental shelf is underway. In order to meet the targets of the Paris Agreement to lower emissions, the Longship project has been launched by the Norwegian government to implement this carbon capture, transport and storage project. The project is being implemented with the aim of improving the developed technology and expanding applications to cater to future CO2 storage needs in Norway and the European Union.

One of the main concerns associated with geological storages is the potential for leakages. From previous experience and monitoring studies, the consensus is that the potential for leakages after storage in the deep formations is low. But in large-scale implementations that would require transportation and handling of pressurized liquid CO2 by ships, subsea transportation lines and injection facilities there is a higher probability for accidental leakages of varying scales.  These leaks can range from weak bubbling seeps to violent buoyant plumes. The latter has a potential to rise several hundred meters in the water column to reach the sea surface in a situation of a large capacity pipeline breaching accidents. Spills from ships may release liquid carbon dioxide, which has the potential to convert to gas form and accumulate at low elevations closer to sea surface because CO2 is a heavier gas compared to air. These may create undesirable conditions for response workers and personnel onboard these vessels.

Depending on leak duration and size, the potential risk and damages associated with the leaks vary. Long-term release of a subsea seep may lead to an increase in acidity in the vicinity of the leak due to dissolving CO2. Large-scale release, even for a short period of time, may damage infrastructure and even threaten the workers lives.  Laboratory and field experiments are controlled environments that allow us to study these release events closely and safely. They further guide in the development and improvement of computational models will give us the ability to simulate many different release scenarios. These model results provide guidance to assess potential damages and risks associated with accidental spills. They are the key to planning necessary response activities associated with the successful implementation of the projects. Furhter they are very beneficial when setting out a legal framework vital to increase confidence and gain approval from communities connected to the varoius stages in a project.

SINTEF Ocean has decades of experience in carrying out experiments and developing modelling tools to predict distribution and the ultimate fate of oil and natural gas spills on the Norwegian Contnetial shelf along with their impact on the environment. The modelling tools developed are widely used by the stakeholders such as oil companies and associated consultancy groups operating in Norwegian waters, to asses the risk and damages related to these accidents. The expertise knowledge and modelling tools developed for the oil and gas industry, certainly can be applied in the applications of accidental releases of CO2 in the Norwegian Continetial shelf and would be beneficial to the stakeholders.