Just a trend? Co-simulation is a term that is perhaps associated with the “latest” developments in numerical time domain simulation technology and has gradually started to infiltrate working methodology and workflow at engineering offices in the maritime industry. The term often appears in conjunction with virtual prototyping and digital twins. But what is co-simulation? What can it be used for and is it really such a big game-changer as it is purported to be?

Fragmented. The prefix “co” in the term co-simulation is short for “coupled” which points towards one of the core ideas behind the technology, namely a fragmented simulator design, with decentralised numerical solvers, where different subsystems can be split into individual components. These components are then loosely connected in a generic, standardised way and the total interconnected system, the simulator, is configured and controlled by a dedicated generic simulation algorithm.

When we have the opportunity to split parts of a system into individual components, which are subsequently loosely connected, the work involved in building a total simulator of a system can also be divided into smaller, separate tasks. And not only that, once the system has been divided into individual components, these are solved separately and communicate their results between themselves at given points of communication. This also allows the calculations to be distributed for increased efficiency. The various individual components that are connected together can also consist of binary codes only, thus enabling collaboration to take place across the industry, and even between competitors, without having to share open source codes which could possible reveal industry secrets. And the latter characteristics show that we are aware of why co-simulation itself has proven to be an important technology in the Norwegian maritime industry. 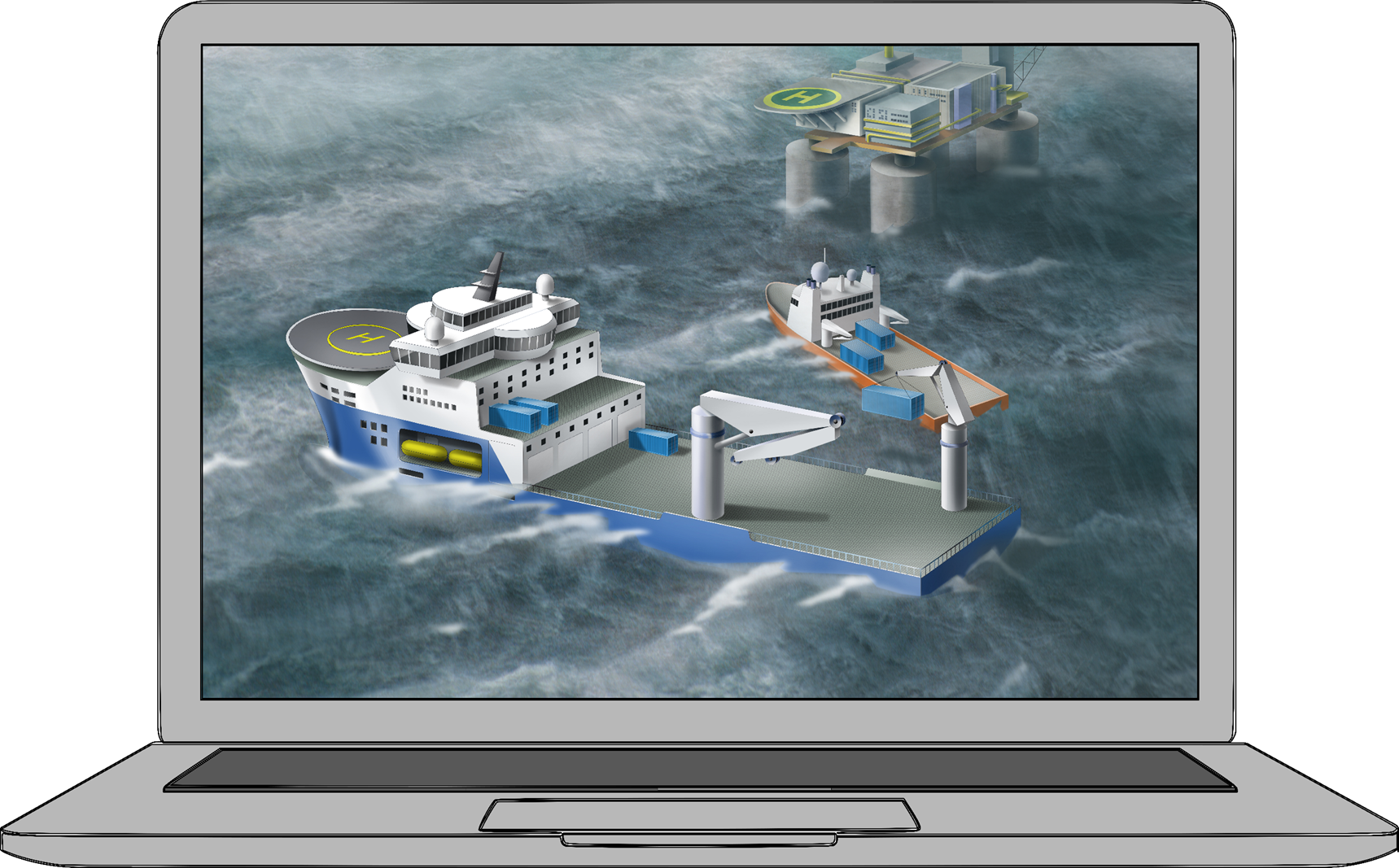 Old, but new. Simulation technology is not a newly developed technology in which the maritime sector can take credit. Simulation technology actually comes from the automotive and aerospace industries where specific products are mass produced. Mass production is not typical in the maritime industry where customisation and individual constructions are common practice. This is probably the reason why the technology has not previously been adopted by the maritime industry. During the early stages of my project entitled Virtual Prototyping of Maritime Systems and Operations (ViProMa), 2013-2016, which was the subject of my PhD, an experienced person pointed out several similar initiatives that went back several decades. Naturally the question as to why this particular project should succeed was also highlighted.

A collaborative tool. What makes co-simulation exciting in our industry is the synergies involved in effective collaboration. Co-simulation can be used as a link between different professional groupings and disciplines in which simulation is widespread. And it can be scaled, from internal company groupings to a collaborative industry where different parties are connected and contribute their specific expertise in order to solve larger, more complex challenges in an efficient, secure, and competitive way. Because there is no hiding the fact that if we are not effective then we are also not competitive, no matter what technology we bring to the table. And once we have first mentioned streamlining, perhaps we should also mention digitalisation, another popular term. I’m not going to try find yet another definition of the concept of digitisation, but digitalisation and streamlining go hand in hand and are often used synonymously with each other.

Streamlining and digitisation. The Norwegian maritime industry is experiencing strong international competition. We are often a preferred supplier and partner, both at home and abroad, when it comes to solving complex challenges that require new, advanced technology. Three complex challenges with increasing scope worth mentioning are electrification of the maritime transport fleet, autonomous and smart vessels and floating offshore wind turbines. All of these more or less represent important steps in limiting the global climate crisis and serve as umbrellas for a wealth of minor challenges that require varied professional disciplines put into context. It is no exaggeration to say that the Norwegian maritime industry is, and possibly will be, a pioneer in these areas and that the international community is looking to us in order to develop new technology and methodology for solving these challenges.

Value added. In addition to being an aid, we are actually left with a digital twin of the system after production and delivery. There are several uses for such digital copies of the physical system, ranging from being an additional source of system monitoring data in various operations to operations planning, training and further development. The use of mathematical models is also an important step in autonomy where advanced control systems and algorithms often make decisions based on system understanding incorporated as mathematical representations of the systems they control.

A growing success. The ViProMa project was a success. A subsequent initiative that should be mentioned in this context is the Open Simulation Platform (OSP), an open-source industry initiative for co-simulation of maritime equipment, systems and complete ships. Based on the results obtained from ViProMa, etc., an open-source framework was developed for co-simulation aimed at the maritime industry. Much of the success behind the OSP is the choice of the co-simulation standard. Like ViProMa, OSP is based on the de-facto Functional Mock-up Interface(FMI)(1) standard. This standard has been developed and maintained by The Modellica Association under the auspices of the automotive industry.

Why is this an important contributor to success? Because the standard is supported by over 150 modelling and simulation tools, which means minimal impact on the existing workflow in the development of simulation models in the maritime industry. Existing in-house simulation models can thus be exported directly as co-simulation models as long as they are modelled in a tool that supports the standard, which is often the case. The list of tools that support the standard is constantly increasing, something which should also be credited to the actual standard which has a simple and well-established interface. Even with in-house simulation tools, supporting this standard is often a minor implementation job. For example, at SINTEF Ocean, we have implemented export functionality for co-simulation models in accordance with the FMI standard for both SIMO(2), VeSim(3) and FhSim(4), in addition to having developed several new modelling frameworks for co-simulation models. Co-simulation has also proved to be a very useful tool in connection with Hardware-in-the-Loop (HIL) and Software-in-the-Loop (SIL) testing that is important in connection with the classification of new systems and vessels.

Disadvantages. Closely connected systems are a challenge. One example of such a system is a ship’s hull with a crane fixed on deck during a heavy lifting operation. The hull itself calculates the movement relative to the environment that affects it, while the crane holding a heavy load also affects the movement of the hull. Thus, in a different setting, the hull cannot determine its movements all by itself since it is also affected by the dynamics of the load. For those who are most interested, this issue is related to the number of degrees of freedom in the system and causality. Other questions that have arisen in both ViProMa and OSP are the accuracy of the simulation results, seen in the light of the assumption of separation of the total system being studied and how shared resources are shared across subcomponents. A specific example of the latter is how the environment in the form of the sea, current, weather and wind is shared across subcomponents in a co-simulation, especially in cases where subsystems affect and change the environment. One example of this is that the hull affects the inflow rate of propulsors, which are also affected by the environment.

Continuation and the voluntary work. Co-simulation technology is obviously not the only tool available when searching for good future solutions. However, this does not necessarily mean that we should not make full use of the benefits and full potential of the technology. Furthermore, in order to increase this potential we need more research and extensive use. Equally important is the fact that co-simulation itself should become a widely known tool in engineering disciplines, something that educational institutions must contribute to, which in turn requires research on the subject to be carried out at all times, preferably with close ties to the industry.

I am somewhat influenced by my maritime background and my interests in maritime systems and operations, something which may have been evident from the various examples and angles that have been highlighted. This does not mean that co-simulation technology is not applicable and useful in other industries, industries and segments. Perhaps you are faced with other issues for which co-simulation could be a useful tool. Or maybe you have different questions and/or challenges than those that have been highlighted here. If that is the case, I would be more than happy for you to get in touch.

Click here to read more about our research project SEACo

0 comments on “Does co-simulation have any value?”