Quantum mechanics has shown us that small particles at low temperatures have a strong wave-like nature. Understanding how this changes how a fluid behaves is crucial at the extremely low temperatures needed to make liquid hydrogen. We have now developed accurate models for these quantum effects to pave the way for export of clean energy as liquid hydrogen. 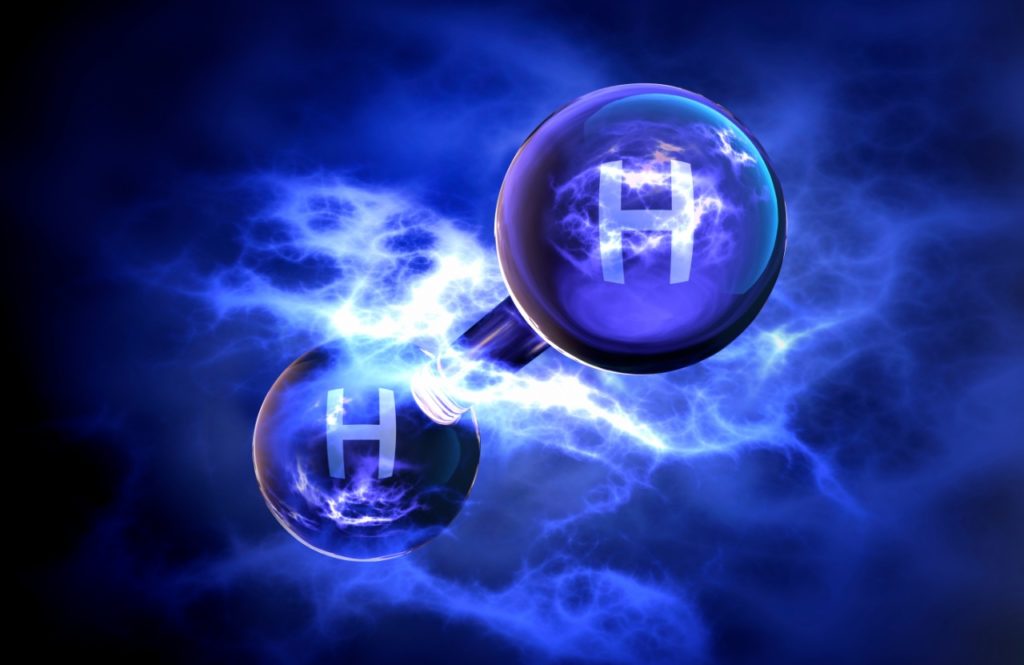 Powering our appliances, transporting people and goods, and heating our buildings requires energy. A major reason for the wide-spread use of fossil fuels is that they contain a lot of available energy in a small volume, much more than for example a battery. Moreover, fossil fuels can be transported around in a flexible manner in pipelines, ships or large trucks without the need to have a power grid nearby. As we know, the use of fossil fuels produces harmful emissions, such as CO2, NOx and SOx. In the future, we must replace fossil fuels with clean fuels that have a similar flexibility, but without the harmful emissions.

Hydrogen is a promising candidate to become a clean fuel for the future. Today, more than 95% of the hydrogen is produced from fossil fuels, but it can also be produced using renewable energy sources such as wind, hydro or solar power to extract the hydrogen from water using electrolysis. When planning for a wide-spread use of hydrogen as an energy carrier in the future, there are some key challenges that must be overcome.

One of these key challenges is how to transport the hydrogen from A to B; in particular if A is Norway and B is Japan. To transport hydrogen efficiently over long distances, it must be transported in a dense state, where the hydrogen molecules are packed together in as little space as possible. At room temperatures and atmospheric pressure, hydrogen exists as a gas that is not very dense. However, the molecules pack much closer together when hydrogen is liquefied. The only problem is that to make liquid hydrogen at atmospheric pressure, one needs to cool the hydrogen down to around 20 kelvin – that is below -250 oC!

Except for NASA’s rocket scientists and the semiconductor industry, there have been very few companies that have been needing liquid hydrogen in any meaningful quanta. Since liquid hydrogen has not yet been in large demand, the present hydrogen liquefaction processes are relatively small-scaled and quite energy inefficient. To design efficient, large-scale liquefaction processes, we need accurate models for how much heat that is needed to cool and compress the hydrogen – in other words, accurate thermodynamic models.

To liquefy hydrogen, it must be cooled below minus 250 degree Celsius. In addition, one must make sure that conversion between the two spin-isomers of hydrogen, orthohydrogen and parahydrogen, takes place. Quantum mechanics tells us that the two protons in a hydrogen molecule (H2) each has a spin. In one of the spin-isomers, orthohydrogen, these spins are in the same direction. The opposite is true for parahydrogen. It turns out that these spins have a large effect on the energy stored in the hydrogen molecule.

The amount of energy released when orthohydrogen converts to parahydrogen is large, and this energy must be removed when cooling the hydrogen. This means that it is very energy demanding to liquefy hydrogen. However, the benefits of doing this can be worth the effort. For every ship with liquid hydrogen that is exported from Norway to Japan, the alternative is to send five ships with compressed hydrogen at 200 bar pressure. This will be much more expensive and take more time.

Key components of the liquefaction process

At the heart of the liquefaction process is the heat exchanger, where the hydrogen is cooled by a refrigerant flowing in an adjacent channel. Very few substances can be used as refrigerants in the hydrogen liquefaction process. The reason for this is that the extremely low temperatures required to liquefy hydrogen will cause most substances to become solid and get stuck in the equipment. The only substances that can exist as liquids below -220 oC are helium, neon, hydrogen itself, and their isotopes such as deuterium and tritium.

Cooling processes are found all around us. They are inside of the refrigerator in your kitchen, and in the air condition at a hotel room. These cooling processes usually have low or moderate energy efficiencies. Much of the loss of efficiency comes from the need to compress the refrigerant to a high pressure before it can release heat to the surroundings. Pure hydrogen and pure helium are popular choices of refrigerants that are used in the present hydrogen liquefaction processes. The drawback of using these fluids is that simple piston compressors must be used, which operate by the same principle as your bicycle pump.

A more appealing alternative is turbo-compressors, where the kinetic energy from the particles gained from rotation is transferred into a pressure increase when the particles are slowed down again. Since the hydrogen molecules are so light, even a super-fast rotation in the turbocompressor translates into a very small pressure increase. A way to overcome this challenge is to mix the noble gas neon into the refrigerant.

Read more: The Potential for Hydrogen in Europe

Since neon particles are quite heavy, 10 times heavier than the hydrogen molecule, mixtures with neon can make turbomcompressors work. Turbocompressors can easily be upscaled so that large amounts of hydrogen can be liquefied. It turns out that mixtures of helium, neon and hydrogen also boil and condense at ultra-low temperatures, which enhances the heat transfer between the refrigerant and the hydrogen to be liquefied. This additionally reduces the loss of energy efficiency in the process.

Quantum mixed refrigerants consisting of helium, hydrogen and neon could potentially be a blessing for the liquefaction of hydrogen. Unfortunately, there has so far been no accurate description of the properties of these mixtures at low temperatures. The reason for this is that the properties of these mixtures are strongly influenced by quantum effects and deviate from the typical behaviour seen at higher temperatures.

Researchers at SINTEF Energy Research and the Norwegian University of Science and Technology (NTNU), in collaboration with Prof. Erich Müller and colleagues at the Imperial College in London, have taken up the challenge and have now developed the first accurate description of these mixtures.

The results, recently published as a paper series in The Journal of Chemical Physics, are both a contribution to fundamental science and a key to more accurate modelling of these fluids for industrial processes. Their final paper was awarded “Editor’s pick” in the journal, a distinction given to papers that the editors believe will be particularly influential.

One of the most important effects to account for to capture how the properties of fluids change at very low temperatures is quantum swelling. Quantum swelling means that the particles appear bigger due to their wave-like nature. This impacts thermodynamic properties, for example by increasing the pressure. One of the key goals of our research is to understand how particles that exhibit strong quantum effects interact on a molecular level. To accomplish this, we have developed force fields that describe the interaction energy between two particles. A key element to achieve this is molecular simulations, where the molecules interact via the force field.

Molecular simulations date back to one of the many scientific breakthroughs made in the Manhattan project during the Second World War. Before this, thermodynamics and most other branches of science had two tools to investigate Nature’s laws: theory and experiment. But with the advent of massive electronic computing power, scientists were blessed with yet another tool – simulations that could be carried out on a computer to mimic the real world.

The idea behind molecular simulations is simple: if you have a model for the forces exerted between two molecules – the force field – then you can place a million of them inside a virtual simulation box and simply measure the thermodynamic properties of this “virtual fluid”, such as pressure, heat capacities, and so on. These properties can then be compared with experiments, to gain insight about how well the force field is doing. Force fields and molecular simulations allow the study of a variety of properties, even non-equilibrium properties such as how heat and matter is transported within the fluid.

The advantage of using molecular simulations, is that they allow us to test a theory without worrying about the cost, duration, safety issues and uncertainty of the experiments. Real experiments at the super-cold temperatures of the hydrogen liquefaction process are both challenging and expensive!

Even tough computers have become very powerful, it still takes time to compute properties by use of molecular simulations. For design and optimization of the complete hydrogen liquefaction process, it is necessary to predict the thermodynamic properties of complicated quantum fluid mixtures, thousands of times every second. To achieve this, the new information about quantum fluids at the molecular scale must be incorporated into a fast computation in the form of an “equation of state”. An equation that provides the pressure and many other thermodynamic properties at a given temperature, volume and composition in a relatively short amount of time.

The linking of force-fields and equations of state can be done for classical fluids using a well-trodden approach known as thermodynamic perturbation theory. The idea behind this theory is to use a very well-understood reference fluid, such as hard spheres bouncing around in a box, to capture the statistical structure of where individual molecules are found, and then adding in as perturbations the real effects of the specific fluid like attraction between molecules. While this may sound simple, perturbation theory has been shown to be a powerful tool.

At this point, you may have noticed the central difficulty. How did we combine the “fuzziness” of the quantum fluids, with the requirement to have a simple and well-understood reference fluid? At first, this seemed like a challenge too hard to overcome. Fortunately, we got help from one of the true giants in their field, Richard Feynman. Although Professor Feynman died more than 30 years ago, he wrote a very good book on quantum mechanics.

In the book, he developed the so-called Feynman—Hibbs quantum corrections, which could be added to an effective classical force field to effectively model the “fuzziness” of the molecules. This was the missing piece of the puzzle for a successful strategy to develop both new force fields and equations of state. Using this new strategy, where the thermodynamic perturbation theory could be used, quantum corrections could be applied and the results evaluated using molecular simulations gave a new equation of state for these quantum fluids as well as new force fields.

Even though we have made much progress in terms of describing quantum mixed refrigerants, there are still many exciting challenges to overcome. For instance, at certain conditions, the thermodynamic perturbation theory falls short in terms of capturing the demanding modifications imposed by the quantum effects. The thermodynamic perturbation theory must be developed further on a fundamental level in order to remove this shortcoming. Another challenge is the possible formation of solid neon at the lowest temperatures. This must be figured out in the years to come to avoid that neon crystals get stuck in the process.

However, arguably the most important challenge at the moment is to develop the next generation highly efficient hydrogen liquefaction processes that can be used to export clean energy from Norway to the rest of the world.