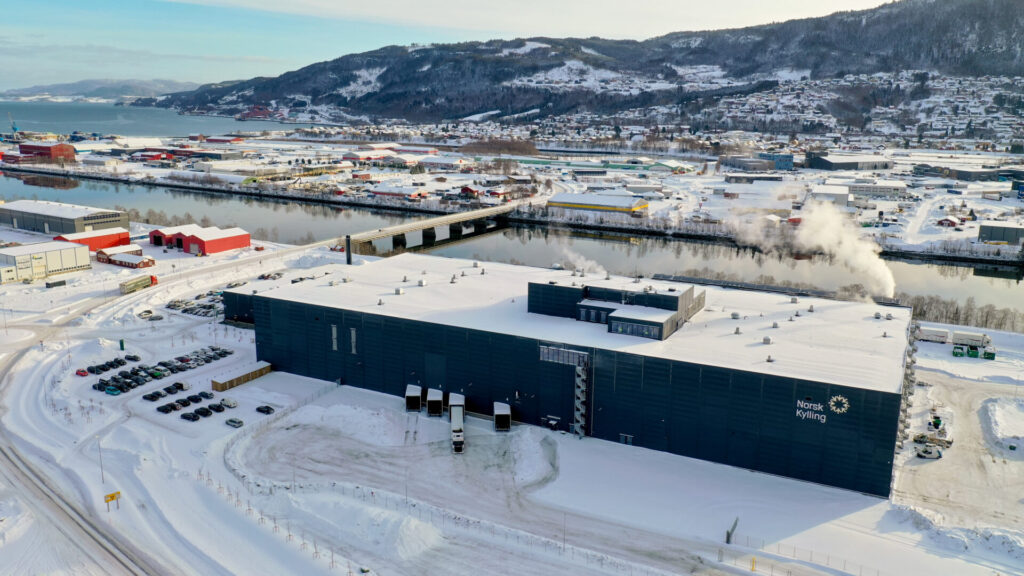 Large savings can be made by using refrigeration capacity during off-peak hours and “storing the cold” for when it’s needed.

Refrigeration is a key part of modern society, whether to ensure a comfortable climate in our homes and offices by air-conditioning or to keep our food cold to preserve its quality and reduce waste. The refrigeration systems we normally encounter in our daily lives, such as the domestic refrigerator and freezer, use electric power to operate. Figure 1 shows the principle of operation of a refrigeration system.

As a general rule of thumb, the larger the difference between the low temperature and high temperature, the more electricity is required to transfer the same amount of heat. In essence, air conditioners, supermarket refrigeration systems and industrial refrigeration systems in processing plants follow this principle of operation, just with different ambient conditions and mediums to be cooled.

The electricity demand is growing worldwide due to the ongoing decarbonisation of industry and transport, as a measure to reduce emissions of greenhouse gases. Large growth in the refrigeration and air-conditioning markets, particularly in emerging economies such as India, is one of the largest drivers of the global electricity demand. The International Energy Agency predicts that air-conditioning for the residential and commercial sector is going to cause up to 40 % of the peak electric power demand in warm climates by 2050 if the current trend continues. For this reason, it is important to spread the knowledge and implementation of sustainable and clean cooling technology to emerging economies.

SINTEF participates in the project Future Refrigeration India (INDEE+), an umbrella project funded by the Norwegian Ministry of Foreign Affairs covering several dedicated projects supporting the Indian refrigeration and air conditioning sector in the transition towards more environmentally-friendly technology. Refrigeration technology is essential in the entire food cold chain from farm to fork, and is responsible for a significant share of the global greenhouse gas emissions. This is addressed in the SINTEF-coordinated EU Horizon 2020 project ENOUGH.

There are two methods of storing thermal energy in a material: By changing the temperature of the material (sensible CTES) or by changing the phase of the material from liquid to solid (latent CTES). Figure 3 describes the difference between these two methods. We observe that for a given temperature limit, latent CTES can store additional thermal energy compared to sensible CTES due to the change of phase occurring at a constant temperature (Figure 3 right). In most materials, including water, the amount of energy stored in the phase change from liquid to solid is many times larger than the energy stored by change of temperature for practical temperature ranges. A common term for materials where the latent heat capacity is used for the purpose of storing thermal energy is phase change materials (PCM). For the interested reader, the topic of PCMs was described in detail in a previous SINTEF blog post, covering the benefits and challenges of these materials.

What are Phase Change Materials? (Will they be the next big thing in Norway?)

The main benefit of PCMs related to CTES for refrigeration systems is the possibility to store and release thermal energy at a constant temperature, which matches the process in the refrigeration system very well.  PCMs have become an emerging product on the market, and PCMs with a phase change temperature down to -40 °C are available.

CTES technology is not a new idea: cutting and exporting natural ice was a big business in Norway before modern refrigeration technology was invented. Fuelled by the energy crisis in the western world during the 1970s and early 1980s, there was an increased focus on energy efficiency and novel technology development in industry, government and academia. This once again sparked the interest for CTES technology among researchers and in the industry.

One of the outcomes was the completion of several demonstration projects in the US, Canada and Japan where CTES technology was implemented in large chillers for air-conditioning systems. The principle was storing cold energy in large cold-water tanks or tanks filled with ice to serve the cooling demand during peak summer periods where extra refrigeration capacity was needed, and the supply of electricity was limited and expensive. A glycol solution was circulated in tubes inside the tanks to transfer the heat to and from the storage and the refrigeration system.

This principle works well if the temperature required by the process is above the freezing point of water, such as for air-conditioning. The required temperature is significantly lower in many processes, and the temperature for a CTES system must follow. The penalty in energy efficiency by using the intermediate heat transfer circuit between the refrigeration system and the storage is significant for low-temperature CTES.

A crucial aspect of the research covering thermal energy storage in HighEFF is developing new solutions and the hardware that allows for direct connection between the refrigeration system and the storage. For my PhD project in HighEFF, I investigated the potential for integration of CTES technology in industrial refrigeration systems. One of the motivations for doing this  was the planned construction of a new poultry processing plant of Norsk Kylling in Orkanger, owned by HighEFF partner REMA 1000. Innovative energy concepts for creating a plant with a low carbon footprint were planned, where thermal energy storage technology was indicated as one important factor to reach the targets, both on the cold and hot side of the processing plant. The challenge was that a suitable technology was not yet ready for the cold side. This constituted a hurdle to fulfilling the complete energy concept of the plant.

Developing an energy efficient CTES unit suitable for industrial refrigeration became the main focus of the research, with relevance to the entire Norwegian food processing industry. A well-designed CTES unit for this application must be compact, provide efficient heat transfer to and from the storage and be suitable for upscaling to fit multiple load characteristics and storage requirements. It became clear that using PCMs was the solution to pursue, due to the large thermal energy storage capacity they provide.

To make a qualified judgement on the state-of-the-art CTES technology using PCMs for refrigeration systems, it was necessary to screen the existing literature on the topic. The previous research on low-temperature PCMs, characterisation methods and applications of CTES technology in various parts of the refrigeration sector was collected and systemised in a review paper.

Based on the findings, a prototype of a CTES unit was designed and constructed in cooperation with Skala Fabrikk in Trondheim. The unit was based on a special type of heat exchanger plate called pillow plates that were suitable for handling the pressure in CO2 refrigeration systems used in many food-processing plants (see Figure 4a). The novelty of the new CTES unit was connecting the storage directly into the refrigeration system, avoiding any intermediate circuit of heat transfer fluid. The heat exchanger is immersed in the PCM, which solidifies during the charging process of the storage and melts during the discharging of the storage.  An experimental test facility was designed and constructed at the refrigeration laboratory at NTNU Gløshaugen to map the performance of the newly developed CTES unit. Figure 4 shows the different components of the CTES unit before its installation in the laboratory’s test facility.

Several test campaigns were carried out with different PCMs and heat exchanger configurations. The experimental test campaign showed that connecting the refrigeration system directly with the CTES unit was feasible, and successfully demonstrated the pairing of solidification/melting of the PCM with the evaporation/condensation process of the refrigeration system. It was found that the most important parameter affecting the performance of the unit was the temperature difference between the PCM and the refrigerant inside the CTES unit, both for the charging and discharging process. It was also found that the performance of the CTES unit can be manipulated by changing the distance between the pillow plates in the heat exchanger (see Figure 4e). Further development and refining of the CTES unit would be beneficial, particularly on the topic of establishing a control strategy for achieving a more constant heat transfer rate from the storage during the discharging process.

You can learn even more about the research presented in this article by reading our paper: Cold thermal energy storage for industrial CO2 refrigeration systems using phase change material: An experimental study

The way forward and ongoing activities

There is an increasing interest in CTES technology from both the Norwegian industry and government, as well as internationally. The research and knowledge on CTES technology generated within the PhD project at HighEFF continue to be applied within several other areas of the centre where storing thermal energy is relevant, such as in heat pump and refrigeration processes. Further development of CTES technology for refrigeration systems is the key activity in the SINTEF-project KPN PCM-STORE. The main objective is to develop the knowledge required to implement affordable and efficient low-temperature PCM-CTES units for applications in the food industry, with applications spanning the temperature range from 5°C to -50°C.

Thermal energy storage has also been identified as an important enabling technology when shifting to future low-emission propulsion systems in the maritime transport sector, such as LNG, battery-hybrid and fuel cell technology. The development of innovative and integrated cooling and heating concepts onboard modern cruise ships are investigated in the project KPN CruiZE, where storing thermal energy is central to maximise waste heat and cold utilisation. Innovative concepts and design methodologies for low-emission hotel facilities onboard passenger boats are being developed in the project IPN Lowpass, where integration of thermal energy storage technology is an important aspect.

The next step for CTES technology using PCM will be taking the results and knowledge obtained from the laboratory tests and simulation studies to design a pilot installation together with a relevant industrial partner, proving the field performance and benefits of the technology in a real process. At the processing plant of Norsk kylling, a steam accumulator operating as a high temperature thermal energy storage has been realised with support from ENOVA. For the low temperature CTES system developed in the PhD project, the refrigeration system at Norsk kylling is prepared for a pilot installation. Plans are to install a pilot CTES system at the plant as soon as a vendor is ready to deliver the technology. CTES pilot installation are also currently being discussed for the dairy industry and in supermarket refrigeration systems. The experience gained from field tests will be important for the stakeholders in the industry to gain confidence in CTES technology, demonstrating the potential of the technology and ensuring further implementation across multiple sectors.