The Hall-Héroult process, patented in 1886, is currently used universally for the smelting of primary aluminium. Since then, of course, many improvements have been made in terms of scale, process performance and energy consumption, although the principle remains the same. The problem with this process is that it produces more CO2 than it does aluminium. If we could succeed in replacing the carbon anodes with inert materials, it would be possible to eliminate CO2 emissions from the smelting process. But that is only half the story. I will use this blog to go into more detail. 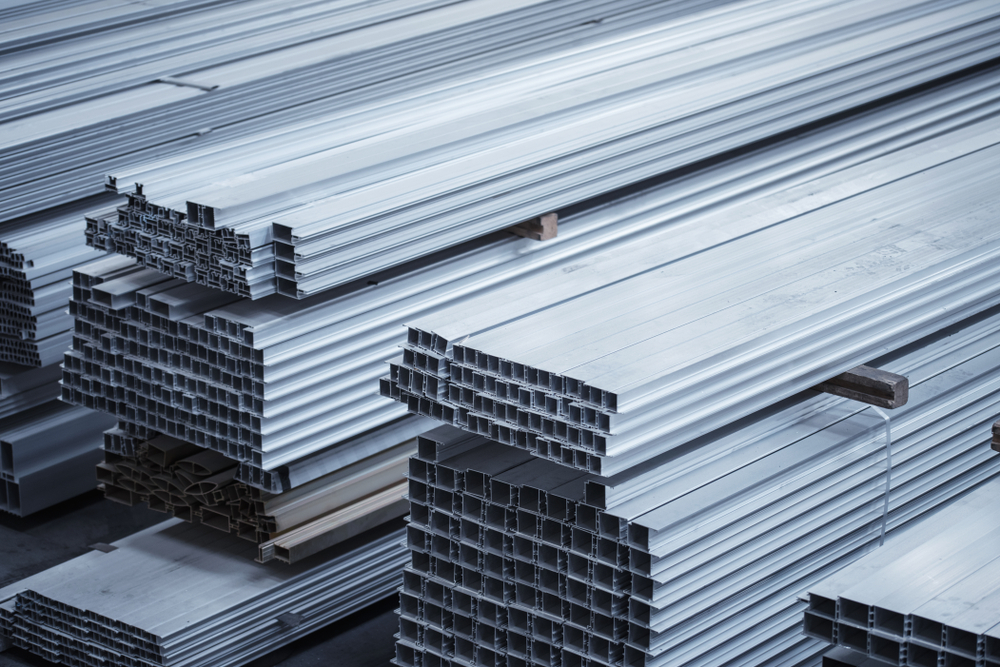 The Hall-Héroult process involves an electrolysis by which the raw material (aluminium oxide, Al2O3) is dissolved in a molten fluoride electrolyte at 960°C. The electrodes are oriented horizontally. Aluminium (Al) is formed at the cathode (in the electrochemical sense), which is the top of the molten metal. The process employs carbon (C) anodes. The anodes are for the most part made of petroleum coke, which is a waste product of oil refinery processes. The carbon is consumed to produce carbon dioxide (CO2) in the anode reaction. This means that more carbon dioxide is formed than aluminium, amounting to about 1,500 kg CO2/t Al in modern smelting plants.

A great deal of interest has been shown in the development of inert (non-consumable) anodes, at which oxygen (O2) is formed instead of CO2. One of the inventors of the current process, C.M. Hall, patented this method as early as in 1889, although not out of any concern for climate change. In spite of our determined efforts, we have yet to succeed in developing inert anodes. The problem lies in producing a material that is “sufficiently inert”. In order to produce aluminium of adequate purity, the solubility of the anode material in the electrolyte must be very low because a technology capable of cost-effectively decontaminating the metal of all impurities currently does not exist.

A technology based on inert anodes has the potential to reduce the annual carbon footprint of Norwegian aluminium plants by two million tons of CO2. However, there are also some disadvantages linked to this technology, which means that we will not necessarily be able to fulfil this potential on a global scale.

Aluminium smelting – energy consumption with and without inert anodes

Aluminium electrolysis is a very energy-intensive process. In 2016, in Norway alone, approx.  18 TWh/year was required to produce 1,282 Mt of aluminium from seven plants (Mosjøen, Sunndal, Høyanger, Årdal, Husnes, Karmøy and Lista). Such electricity consumption is equivalent to 14 per cent of all hydropower generation in Norway. Global production of aluminium in 2018 was 64 Mt. During the last two to three decades, there has been tremendous growth in China, other parts of Asia and the Middle East, where production is based on electricity derived from fossil energy sources such as coal and natural gas.

In theory, the lowest achievable level of energy consumption in an ideal process (without heat loss) is 6.24 kWh/kg Al, although in practice, consumption runs at approximately twice this value. This is because we cannot conduct electricity (often at between 300 and 500 kA) without ohmic voltage loss. We also rely on being able to form a coating of frozen electrolyte on the inner walls of the electrolyte cell, because the combination of metal and molten electrolyte is very corrosive to the cell wall linings. This requires a high heat flux through the cell wall, and the reduction of heat losses is one of the main challenges linked to reductions in energy consumption.

Inert anodes exhibit higher theoretical levels of energy consumption than carbon anodes (9.16 kWh/kg Al). This is because inert anodes cannot utilise the chemical energy stored in carbon. It may be noted here that all of this chemical energy is utilised in the Hall-Héroult process, while the efficiency is much lower  in a thermal power plant. There is no evidence to suggest that it is easier to reduce heat losses from cells containing inert anodes, so we will have to expect consumption levels at about 3 kWh/kg Al greater than is the case for the existing process. Since electricity generation releases much more CO2 than the electrolysis (assuming renewable energy is not the source), the total carbon footprint, taking electricity production into account, may be greater using inert anodes (see figure 1).

Unfortunately, in a global context, the aluminium industry is trapped in a long-term trend in which renewable energy is being replaced by electricity derived from the combustion of coal (see figure 2). More than 60 per cent of the world’s aluminium is currently produced using electricity derived from coal, while less than 30 per cent is based on hydropower. Three or four decades ago, the situation was the opposite. Moreover, global production of aluminium has increased four-fold since 1980. In total, this means that CO2 emissions from electricity generation used to power aluminium electrolysis have increased by an order of magnitude. It can thus be claimed that CO2 derived from power generation is the greatest environmental problem linked to global aluminium production. However, this cannot be remedied by the aluminium industry alone. 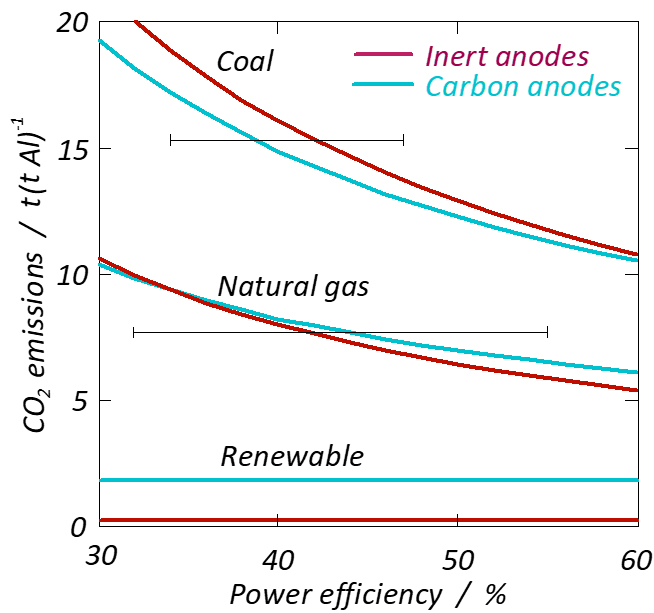 Figure 1. Total CO2 emissions from different types of power plants, electrolysis plants and anode factories as a function of power plant efficiency. The horizontal bars indicate the ranges in variation in efficiency for existing power plants. 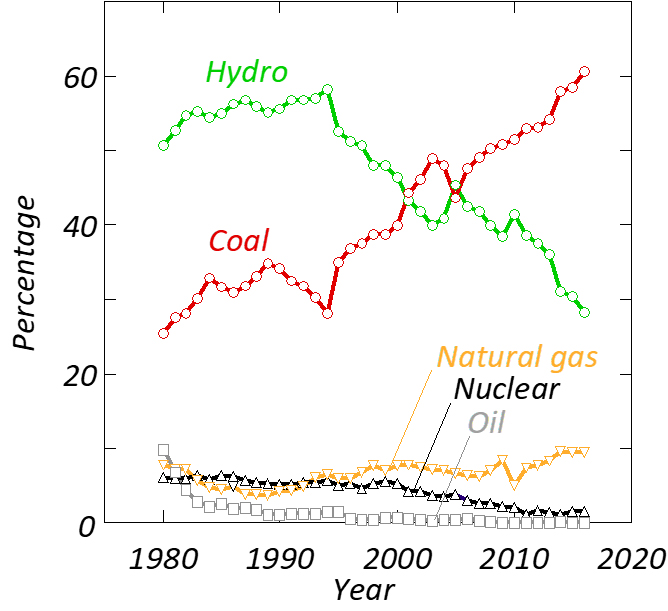 In a future scenario in which an investor has the choice between conventional electrolysis technology and the use of inert anodes, only the best technologies will be considered. A comparison of cells with inert anodes with  the best  Hall-Héroult technologies  thus still remains the correct approach. However, it doesn’t always happen this way. We must also factor in that new technology elements, which are essential to the introduction of inert anodes, could also be used in carbon anode cells. The construction of a new aluminium smelting plant will require an investment of several billion Norwegian kroner. It is not possible to modify the technology in the short term. An electrolysis technology may well have a lifetime of 50 years, but only if modifications are made during this period.

One argument in favour of using inert anodes is to prevent the formation of perfluorocarbons (PFCs), which are a group of very powerful greenhouse gases. PFCs are formed at carbon anodes when the oxide content of the electrolyte is too low. Inert anodes require that the electrolyte has a much higher oxide content than is standard in the current process in order to prevent catastrophic corrosion, referred to as “autocannibalism”, by which the anode consumes itself. It is not possible to achieve high enough concentrations of oxide using existing feed technology, but if we succeed in developing adequately effective feeders, these will also be incorporated into conventional electrolysis technology. Logically, this means that if it becomes feasible to operate a cell using inert anodes, it will also be possible to eliminate all PFC formation from the current aluminium smelting process.

There are many technology elements that have to be in place before electrolysis technology using inert anodes can be considered a feasible option. As far as we know, an adequately effective anode material has not been identified, and the challenge related to the oxide feed process has already been mentioned. The full potential of inert anode technology can only be met if the electrodes are oriented vertically. In this situation, a cathode material must be used that is wetted by aluminium, enabling a film of metal to form that then runs off. Titanium diboride is a possible, but expensive, candidate, but here the electrolyte will have to be modified in order to avoid the precipitation of solid fluoride and oxide due to specific features of the cathode reaction. It will also be necessary to identify an inert material with which to construct the sidewalls. The latter can also be used in traditional cells in which so-called freeze lining is practised.

During the last three decades, many billions of kroner have been spent on the development of inert anodes. There have been many reports that a solution is ready, and that the construction of an electrolysis plant is just around the corner. In my opinion, there is every reason to be sceptical both about the chances of identifying adequate materials, and that a new process will get to grips with the real problem – the excessive volumes of greenhouse gas emissions linked to electricity generation from fossil energy sources.  A provisional analysis shows that a modified Hall-Héroult process employing CO2 capture may be a better alternative [1].

All this considered, development of the essential technology elements will enable the construction of a plant in which both the anode factory and the work-intensive processes linked to anode replacement are eliminated. The cells will leave a much smaller geometric “footprint” than Hall-Héroult cells of equivalent capacity, which is also a significant economic argument. However, specific energy consumption will be expected to be greater, some essential technology elements have not yet been developed, and the materials are not in place.

Work on inert anodes – at SINTEF and globally

There are currently many research groups working on inert anodes. The Russian company RUSAL is currently operating with pilot cells based on the use of metal anodes. A Chinese company has pilot cells using cermet anodes (made of a mixture of a metal and ceramic material). Elysis is a relatively new consortium made up of the companies Alcoa, Rio Tinto, Apple and the Canadian authorities. Elysis is planning to spend more than a billion kroner on the development of cell technology based on the use of inert anodes, and are claiming that they will have a commercial process in place in 2024. In Europe, Arctus Metals in Iceland is conducting R&D into inert anodes. We are also familiar with other initiatives taking place within the EU.

Many years ago, SINTEF conducted a major project involving the development of inert anodes together with a major Norwegian player, but currently has no ongoing activity. The technological challenges are formidable. We may perhaps become involved in one or many of the aforementioned activities if we see potential for a solution.

There also exist entirely other processes that may emerge as competitors to the Hall-Héroult process. Alcoa, together with Elkem, invested for many years in the carbothermic production of aluminium, but this project has now been put on ice after several years of R&D effort. The chloride process, which was developed by Alcoa in the 1970s and 1980s, also presents itself as a possible candidate. If we can succeed in chlorinating aluminium oxide to AlCl3 (this appears to be a bottleneck), and then carry out electrolysis in a chloride-based melt, it may be possible theoretically to reduce energy consumption. This concept is described in another blog posted by my colleagues at the HighEFF research centre.