Electrification is increasingly being promoted as a measure to reduce environmental impact. But the complete electrification of our current energy consumption would require the Norwegian electricity production to increase by over 50%. Moreover, electrification is already causing challenges to the distribution grid, due to high peak loads. Therefore, considering a multitude of energy carriers and resources could prove to be a more optimal and sustainable solution.

Figuring out the potential of synergies between energy carriers is one of the main questions we are trying to answer in our research around integrated energy systems. 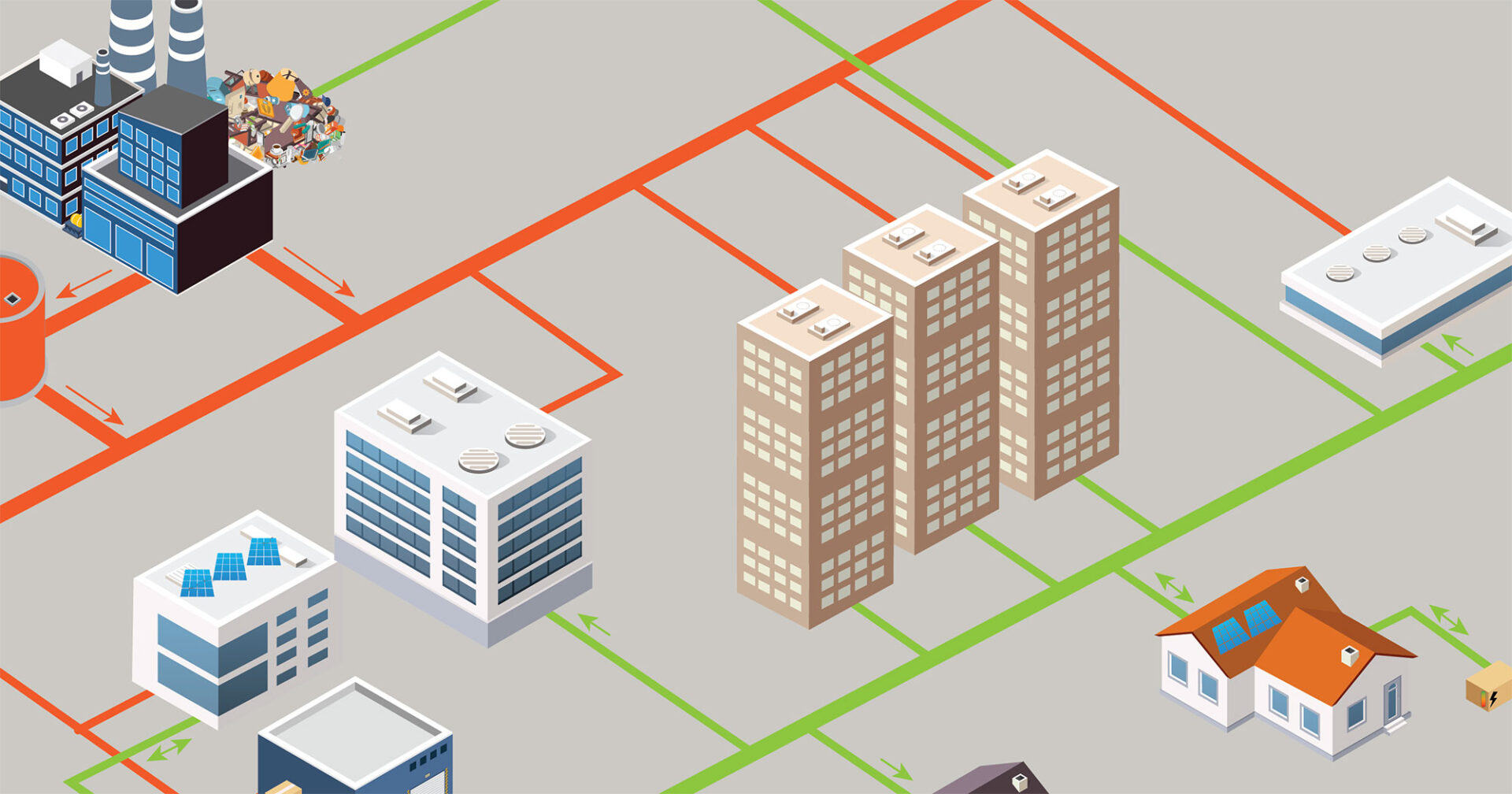 First, what is an integrated energy system?

When we talk about integrated energy systems, we refer to systems where the energy needs are satisfied by using different energy carriers that exploit the different available energy resources in an optimal way. What is special with an integrated energy system is that energy carriers and resources are considered as parts of one larger system where they work together as a whole rather than as separate entities. By using an integrated approach, an energy system can be made more efficient, sustainable, flexible, and reliable.

Why are cities and neighborhoods interesting in this context?

According to SSB, 84% of the Norwegian population lives in 0,6% of the country’s area, typically in cities and towns. Cities mainly comprise households and services, which in 2017 were responsible for 37% of the Norwegian final energy use.

Final energy use is the total energy consumed by end users, such as households, industry and agriculture. It doesn’t include energy used by the energy sector itself.

Energy use in cities has some very specific characteristics. First, over 70% of the energy is used for space and water heating. In Norwegian households, electricity covers approximately 80% of this need (link in Norwegian). Second, the energy demand fluctuates greatly, both over the year and over the day. This is a natural consequence of the fact that energy is mainly used for space heating. As a result, electricity consumption in the winter months can be more than double that of the summer months.

Finally, transport has an important role. This includes both private and public vehicles, whose energy needs have been traditionally covered by fossil fuels. Due to technological development and policy promotion, electric vehicles are increasingly being deployed as an alternative to fossil fueled vehicles. As the transport sector is increasingly being electrified, there is a need for integrated development of energy carriers in order to facilitate the transition in a cost-effective manner.

Not only energy consumers, but also sources of local energy

The fact that most of the energy use in cities goes to space heating represents a big opportunity. While the heating need is today mainly covered by electricity, it could be satisfied with the use of other resources, that are often locally available. Examples are local distributed low-temperature waste heat sources (such as data centers) and relatively more centralized higher temperature sources, such as waste heat from local industries and waste-to-energy plants. This would reduce electricity consumption considerably and make electricity available for other purposes, such as transport (for example charging of new electric vehicles), where electricity is more difficult to substitute with other energy carriers.

The decreasing price of solar photovoltaic and government incentives have facilitated the spread of these systems at residential level. Rooftops represent natural sites for solar system installations. In this way, buildings not only become energy producers, but they also improve their greenhouse gas emission balance over their lifetime. Moreover, the advance of digitalization can make possible to exploit cooperation between distributed and central power generation in the future.

Cities are also a natural source of municipal waste, whose different fractions can have different applications. As an example, food waste can be turned into several useful products, such as biogas, which can be used both in transportation and for heat or power production.

Since urban energy resources typically have a low carbon footprint, they can also reduce carbon emissions. This is particularly true for countries where electricity production mainly comes from fossil fuels. Therefore, local resources represent an opportunity to reduce both dependency from external resources and to release net capacity and electricity for other purposes. Moreover, as we describe in this other blog, waste from city green areas can be transformed into biochar and used as soil amendment in gardens and parks, creating carbon storage in cities.

What are the challenges?

While the electricity grid is extensively developed, district heating networks for distribution of waste heat are limited to some areas. In an integrated approach, future investments in generation capacity and grid infrastructure need to be compared to investments in district heating network development, so that a cost-effective outcome can be achieved.

Heating demand is highest in the winter months, while the availability of many waste heat sources is either constant or highest in the summer. Energy storage can therefore play an important role to help meet the demand at peak times.

These are some of the challenges we are trying to understand deeper. An important step towards more efficient, sustainable, and reliable energy systems will be to develop new knowledge and understanding through research and innovation together with relevant private and public actors.